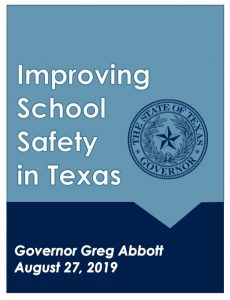 On Wednesday, Gov. Greg Abbott issued a new report lauding efforts aimed at "Improving School Safety in Texas." The school safety update details recent legislative and administrative actions taken, including the approval of 17 new laws and $339 million in state funding. Additionally, the report highlights a 37% increase in the number of teachers and school resource officers (SROs) being trained in mental health first aid; improvements to communications between various state agencies that deal with school safety issues; and new authority for charter schools to hire security personnel. Read more about the new report in this blog post from ATPE Senior Lobbyist Monty Exter.

Also this week, ATPE's lobbyists posted the second installment of our "New School Year, New Laws" blog series here on Teach the Vote with a look at school safety legislation. Check out Monday's blog post by ATPE Lobbyist Andrea Chevalier to learn more about bills that were passed during the 2019 legislative session to address safety issues such as student mental health, school marshals, and school preparedness for emergencies and traumas. Next week we'll be posting an update on new laws pertaining to curriculum and instruction. 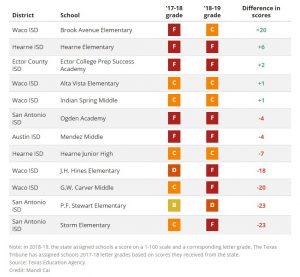 A product of the 85th Texas Legislature, Senate Bill 1882 that was passed in 2017 allows public schools that are at risk of being shut down to partner with charter schools for turnaround initiatives. In the recently released "A-F" accountability grades for school districts and campuses, seven of the 12 public school campuses that have partnered with charters or nonprofits received an "F" rating.

While it may be too soon to draw conclusions about the effectiveness of the partnerships, and there are serious questions about the utility of the A-F system, the accountability ratings offer an early glimpse at how the partnership program is working. Our friend Aliyya Swaby at the Texas Tribune wrote about the findings in this article republished on our Teach the Vote blog this week.

We've reached that point in the year when campaign announcements are coming out practically every day. Find out which legislators have announced their re-election bids in our latest election update from ATPE Lobbyist Mark Wiggins. This week Mark offers insights on the districts where contested races are shaping up and highlights new resources available from the Texas Educators Vote coalition. Read the newest election news roundup here.