From The Texas Tribune: Texas lets struggling schools partner with nonprofits or charters for improvement. But many got Fs this year. 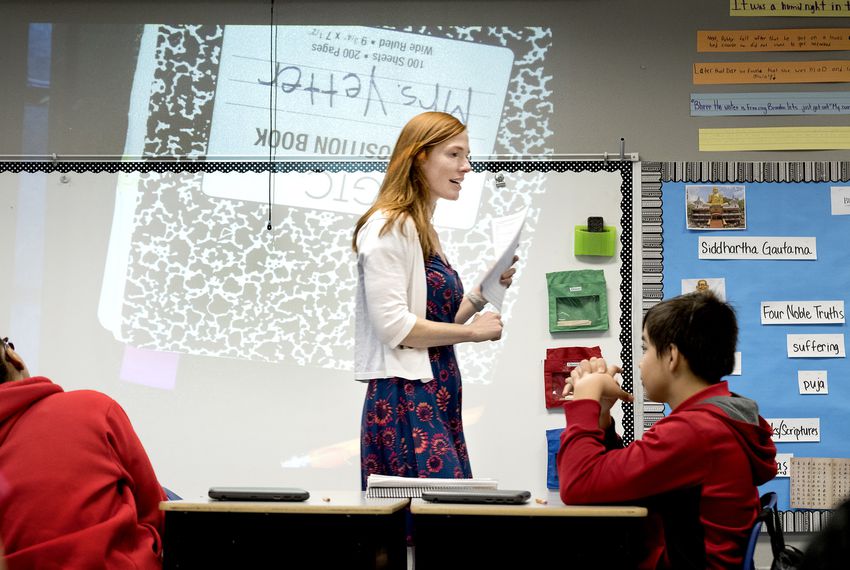 Kate Yetter teaches fifth grade writing at Ogden Academy in San Antonio ISD, which has been low-performing for seven years in a row. Photo by Laura Skelding for The Texas Tribune

Adrain Johnson was one of five Texas school superintendents last year to take a Hail Mary pass in order to improve two low-performing schools: He let a new nonprofit take over the management of Hearne ISD's elementary and junior high, both of which had failed to meet state academic standards for years.

The partnerships, an idea lawmakers approved in 2017, are supposed to give the outside organizations — charter groups, private nonprofits or universities — flexibility to try out new educational models and hopefully lead to major gains in student test scores. In return, the low-performing schools get more money per student and a two-year pause from any state penalties, which are required after a school has underperformed for five years or more in a row.

But after a year being run by Hearne Education Foundation, and managed by a separate appointed school board of regional educators, Hearne Elementary School received its seventh consecutive failing rating from the state this month, meaning it may have to shut down unless it passes over the next couple of years.

In fact, seven of the 12 schools across the state in similar partnerships with nonprofits or charters received F ratings this year, including four that, like Hearne Elementary, that could face state sanctions if they don't pass in the next couple of years. All 12 schools serve student populations that are between 70% and 100% economically disadvantaged, in school districts with higher rates of teacher turnover than state average.

The 2017 Texas Legislature allowed public schools to partner with charter groups and nonprofits, giving them two years to demonstrate progress and avoid shutdown. After the first year, the direct effect of the partnerships is unclear. 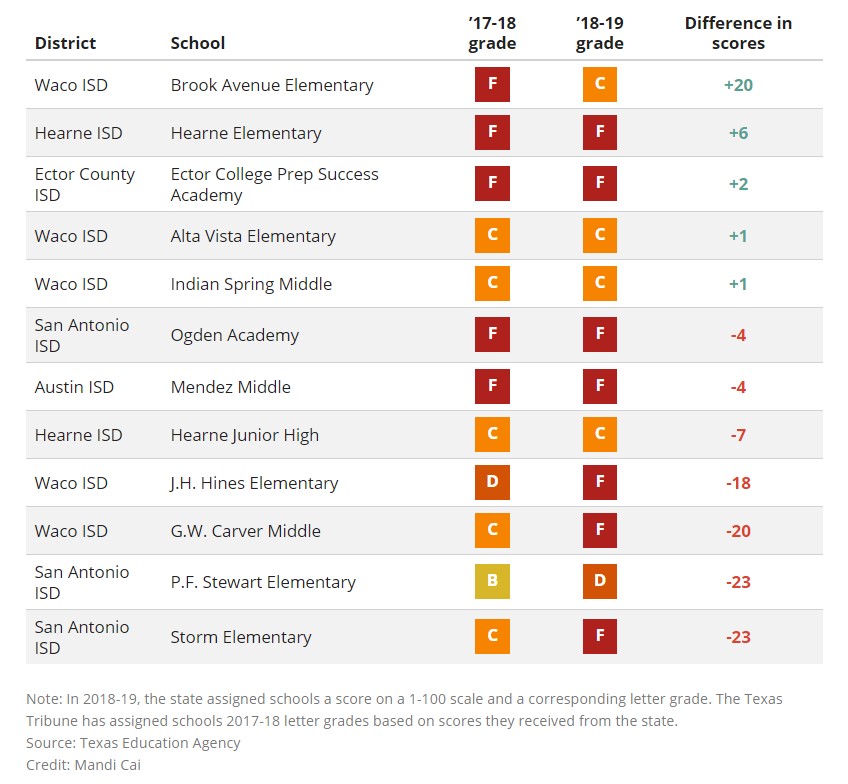 Hearne Junior High, a rural Central Texas school with 100% economically disadvantaged students, had actually managed to improve significantly before the partnership even started and its performance remained relatively steady this year. That means it's safe for now from any state penalties.

Johnson said he's proud of the district's improvement, given the challenges an underperforming school faces in being able to overcome the stigma of working or learning there. It's hard to convince high-quality teachers to work in a school that may close within a few years. And the elementary school's new principal didn't have much time to build relationships with staff members and students before the next round of state tests came.

Texas recently switched its school assessment system to give schools and districts letter grades based almost entirely on state standardized tests, especially in the elementary and middle schools, replacing a previous pass/fail system. And alongside the new report card came higher stakes and drastic penalties for the schools that perform poorly year after year.

But lawmakers gave school officials a life raft from those penalties by incentivizing them to partner with private or governmental groups — a last ditch effort at improvement before the schools are forced to completely shutter. Any school can be under a partnership; underperforming schools get the benefit of a temporary pause on having their ratings count against them.

Transforming a long-struggling school into a top-rated one requires more than just a focus on academics. It also requires a massive cultural shift: stopping teachers and principals from leaving at such high rates, figuring out better ways to manage student behavior and erasing a negative reputation earned over the course of several years.

"This first year would've been great if all our partnership schools would have done amazing. But this kind of change and these turnaround strategies don't happen overnight," said Bibi Yasmin Katsev, executive director of the Texas District Charter Alliance, which advocates for district-charter partnerships.

She warned against coming to conclusions too soon about the value of the partnerships.

"Just looking back on this one year, we are really hopeful and we really think a lot of these schools will improve themselves after the next year," she said. "If not, we really need high-quality partners."

The challenges a school district faces don't just go away with a new partner. Ector County ISD, in West Texas' oil-rich Permian Basin, is missing almost 20% of needed teaching staff, starting the year with 349 vacancies, said Scott Muri, the new superintendent. Housing is extremely expensive in the area and teachers have turned jobs down because they can't afford to live there.

"You can get a good wage job here. The oil industry pays. But in education, we have a hard time competing," he said.

In Waco ISD, where five low-performing campuses were turned over to a new nonprofit, administrators said many teachers jumped ship at two of the schools before the partnership even began. That left the nonprofit starting at a disadvantage finding high-quality educators — a key goal of the partnership.

Those schools — J.H. Hines Elementary and G.W. Carver Middle — both improved significantly in 2017-18, but then plummeted to an F this year, with the latter dropping the equivalent of two grades.

But all of Waco ISD's schools have met state standards for at least one of the last five years, meaning they won't face state sanctions anytime soon. Waco ISD officials created their own nonprofit to partner with while state education officials were creating rules outlining how the partnership law would work — a serious logistic challenge, according to Kyle DeBeer, the district's assistant superintendent of communications.

Other districts also faced logistical issues getting ramped up in the first year, with some guidance but little established structure from state education officials.

Besides Hearne Elementary, Ector College Prep Success Academy in Ector County ISD, Ogden Academy in San Antonio ISD, and Mendez Middle School in Austin ISD all need to do better in the next couple of years or else they might be forced to shut down. Shutting down a school is generally extremely unpopular with parents and community members, and requires a school officials to figure out other schools for those students.

Instead of shutting down Ogden Academy, San Antonio ISD handed the management of the elementary school to Relay Lab Schools, a charter organization affiliated with the Relay Graduate School of Education. The school is now a training ground for student teachers, who commit to work in the district for three years after graduation.

"Turnaround is hard and it takes some time and it takes relentlessness," said Mohammed Choudhury, chief innovation officer at San Antonio ISD.

According to Choudhury, Ogden Academy students started off further behind academically than students at Stewart, another chronically low-performing elementary school that improved significantly the year before its partnership began and then plummeted to a D rating this year. Families of students at Ogden are more likely to have less education and lower incomes.

A little-known provision in the partnership law allows low-performing schools to get up to two additional years of a reprieve from state penalties, if the Texas education commissioner approves it. Both Choudhury and Johnson, of Hearne ISD, said they would consider asking the state for an extension from those penalties, if their schools don't improve.

Johnson said Hearne's partnership, which has drawn on the expertise of local school district and university educators, allows them to use data more effectively to pinpoint specific weaknesses. Some of the best teachers from local school districts in East Texas and the Houston area have gone to teach Saturday classes in Hearne, and Texas A&M professors helped with professional development for Hearne's teachers.

Johnson wants those benefits to last.

"We didn't create this and go into this with it being a two-to-three year and done system," he said. "We're trying to build a system that has sustainability."

This article originally appeared in The Texas Tribune at https://www.texastribune.org/2019/08/27/texas-charter-nonprofit-ratings/.