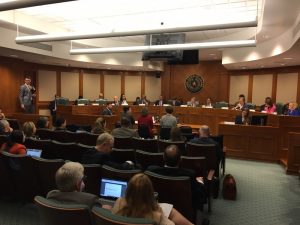 The Senate Education Committee met Tuesday, April 16, 2019. The committee postponed until April 23 a hearing scheduled for Tuesday on House Bill (HB) 3, the major school finance reform bill that the House passed last month. For more on HB 3 and the Senate committee's anticipated hearing of the bill next week, please see this related post on our blog. Instead of hearing HB 3 today, the committee took testimony on a number of unrelated items and approved several pending bills.

The committee heard testimony Tuesday on SB 784 by Sen. Bryan Hughes (R-Mineola), which would add Texas Education Agency (TEA) oversight of human sexuality instruction and require that parents receive notification in advance of when instruction is to be provided, along with a detailed description of the content.

Other bills heard included the following:

SB 722 by Sen. Campbell states that "the board of trustees may not make a severance payment to a superintendent in an amount greater than one year's salary under the superintendent's terminated contract." Sen. Kirk Watson (D-Austin) suggested including charter schools in the bill, and Sen. Campbell indicated she would be willing to work together on such an amendment.

SB 725 by Sen. Eddie Lucio, Jr. (D-Brownsville) would remove the Brownsville ISD bracket on an existing low-income pre-K pilot program and expand it to any students who are "educationally disadvantaged" in a district operating an early high school graduation program. Sen. Lucio explained the bill would allow a district to take money saved by a student who graduates in three years instead of four and use it to fund two additional full-day pre-K students.

SB 740 by Sen. Hughes would create a "Texas Public Finance Authority" empowered to loan money to districts no larger than 1,600 students in average daily attendance (ADA).

SB 968 by Sen. Kelly Hancock (R-North Richland Hills) would require municipalities to regard charters as school districts for purposes of zoning, permitting, code compliance, and development. The bill would also apply land development standards to charters and would prohibit municipalities, counties, or political subdivisions from enacting or enforcing an ordinance that prohibits a charter school from operation.

SB 1133 by Sen. Paul Bettencourt (R-Houston) states that a school district may not have a business interest in an entity or own real property associated with real estate and rental and leasing; arts, entertainment, and recreation; or accommodation and food services -- in other words, a water park.

SB 1182 by Sen. Campbell, would add charter language to the approval section of the Texas Public Finance Authority's bond issuance authority. Sen. Campbell explained this would transfer authority to approve charter bonds from local governments to the state attorney general. Sen. Watson raised questions over how this would cut locally-elected officials out of the loop and whether it would remove discretion.

SB 1454 by Chairman Larry Taylor (R-Friendswood) would create a mechanism through which TEA could elect to transfer the remaining funds of a defunct charter to another charter holder.

SB 2117 by Sen. Bettencourt, would allow districts that have been granted program charters by their board and have contracted with a charter to jointly operate a campus and receive district-charter funding under last session’s SB 1882.

SB 2285 by Sen. Pat Fallon (R-Prosper) would require the TEA committee responsible for reviewing accountability appeals to review challenges by school districts or charters. It would require that the commissioner not limit the challenge if the school district or charter created the inaccuracy and requires that the commissioner correct the rating if the rating assigned was too low.

SB 2293 by Sen. Fallon would make charters subject to the provision of Chapter 617, Government Code, prohibiting collective bargaining and strikes. ATPE supports this bill to create parity between the laws pertaining to charter schools and those that already apply to traditional public schools.

SB 2266 by Sen. Royce West (D-Dallas) would give the TEA commissioner authority to consider local charter school saturation in deciding whether to reject an application for a new charter or a charter expansion. ATPE supports this bill.