ATPE opposed both bills when they were heard the previous week and submitted testimony pointing out the research indicating full-time virtual schools offer a poor quality of education compared to brick-and-mortar classrooms, as well as years of performance data indicating chronic failure among virtual schools already operating in Texas.

The committee also approved the following bills by a unanimous vote: 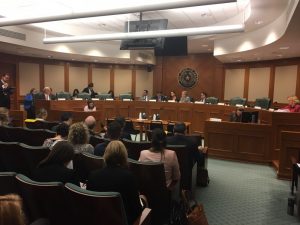 Members next heard testimony regarding SB 608 by state Sen. Kirk Watson (D-Austin). This is the sunset bill for the School Land Board (SLB), which oversees real estate investments within the General Land Office (GLO) that fund education. Typically, the SLB has sent disbursements to the State Board of Education (SBOE), which oversees the broader permanent school fund (PSF) portfolio. This oversight power is the board's sole constitutional duty. Among other things, the sunset bill would expand the SLB to five members from three and allow the SBOE to have a voice in selection of some of the SLB members. SB 1659 by Watson would require the SLB to transfer revenue from real estate to the SBOE for PSF investment and divest and transfer most non-real estate investment assets to the SBOE.

SB 1412 by Sen. Charles Perry (R-Lubbock) would allow a school at risk of closure to execute an accelerated campus excellence turnaround plan, which includes paying high performing teachers a premium to work at the struggling campus. The bill includes ongoing support and a three-year commitment from participating teachers, 80 percent of which would be required to come from the top quartile in terms of demonstrating student growth. ATPE submitted neutral testimony that focused on eliminating a vendor contracting requirement and clarifying that districts may not be required to base their hiring decisions upon student test performance of the educators.

SB 1453 by Sen. Taylor would allow students to use calculator functions on their cellphones in lieu of traditional graphing calculators, which would no longer be required.

SB 1776 by Sen. Donna Campbell (R-New Braunfels) would require every high school to offer an elective course on "the founding principles of the United States."

SB 1777 by Sen. Campbell would require the U.S. History end-of-course (EOC) exam include ten questions from the U.S. citizenship and naturalization test.

SB 2042 by Sen. Pat Fallon (R-Prosper) would require a study of career and technology education (CTE) programs. This would include a look at what industries are in demand in each region of the state, and whether the CTE courses being offered by local schools adequately address those demands. The study would recommend the elimination of some courses that do not appear to benefit the workforce. ATPE supports this bill.

The committee also heard SB 2440 and SJR 78 by Sen. Taylor, both of which would move the administration of the PSF from the elected SBOE to a non-elected, appointed board of managers. The bill would additionally create a "bicentennial education fund" for the purpose of providing compensation for highly effective educators. ATPE submitted testimony against both bills, raising the concern that in virtually every case in which educator effectiveness is tied to pay, effectiveness has been determined by student test scores. Research shows that student test scores are neither valid nor reliable indicators of educator effectiveness. ATPE supports differentiated pay for educators who voluntarily take on more challenging tasks or pursue advanced training and certification, but we believe tying test scores to pay serves only to increase concerns about "teaching to the test."