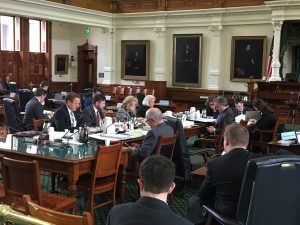 The Senate State Affairs Committee met Monday, April 1, and considered two bills that present serious concerns about free speech rights under the First Amendment to the U.S. Constitution -- particularly when it comes to educators.

Both bills relate to the use of public funds for political advertising, which is already prohibited by state law. ATPE agrees with the current statutes and ethics rules that prohibit public resources from being used for political purposes. Electioneering on school time and with school resources should be illegal. However, the two bills heard by the committee Monday morning would criminalize behavior that is not only nonpolitical, but in some cases even required under state law. Together, they threaten to undermine all of the positive work the Texas Senate has done for public educators so far this session.

Sen. Pat Fallon (R-Prosper) filed Senate Bill (SB) 1569, which would dramatically expand the legal definition of electioneering solely as it applies to educators.

Electioneering is currently defined as advocating for or against a candidate, political party, or ballot measure. For example: A communication created on school district time or using school district money in support of Proposition X or Candidate Y clearly constitutes electioneering and an unlawful use of public resources. As filed, SB 1569 would include activity that advocates for or against “a political philosophy” or “a matter of public interest.” Neither term is defined in law or in Sen. Fallon’s bill, and ATPE contends that each phrase is subject to widely varying interpretation. For example, extolling the virtues of American democracy and our free enterprise system could be considered advocating for a “political philosophy” under this bill – despite the fact that both are required elements of Texas public schools’ curriculum. Likewise, a sign on a school bulletin board promoting a food drive for Hurricane Harvey victims could easily be construed as advocating for “a matter of public interest” if SB 1569 were to be enacted.

Perhaps even more troubling, SB 1569 would expand the definition of “political advertising” to include any political communication “directed to an individual person or multiple persons through any form of communication (emphasis added).” This could treat private conversations between co-workers as political advertising and subject to criminal penalties. As a whole, SB 1569 would impose a separate set of restrictions on the speech of public school employees that is far more expansive than restrictions imposed upon any other category of public employees.

SB 904 by Sen. Bryan Hughes (R-Mineola) aims to prevent third party organizations from sending political advertising to public e-mail addresses, subjecting the sender to a $100 fine per e-mail. This seemingly straightforward idea is complicated by a number of technical factors. First, most political websites allow a visitor to enter their e-mail address and receive automatic campaign updates. This simple process could potentially be abused, either intentionally or unintentionally through "bots" and e-mail spoofing, to rack up massive fines.

SB 904 also extends prohibitions against political advertising to include the use of public communications systems, including WiFi networks. This could have the absurd effect of criminalizing the act of accessing a campaign website from a personal mobile device while off the clock and sitting in a school parking lot. It could also jeopardize a majority of computer use in the Texas State Capitol, where visitors are offered free public WiFi and politics is a major topic of discussion.

Public resources clearly should not be used for electioneering, but such activity is already expressly prohibited in state law. ATPE believes expanding current law in an attempt to broadly restrict the speech of educators as proposed by SB 904 and SB 1569 is unnecessary, discriminatory, and raises serious concerns about potential violations of the First Amendment. Taken together, these bills would likely have a severe chilling effect on educators' speech.

We urge you to contact your state senator and ask them to OPPOSE SB 904 and SB 1569. ATPE members can use our simple tools at Advocacy Central to send a message to their legislators about these bills.

UPDATE (added 4/5/19): The Senate State Affairs Committee met again on Thursday, April 4, and voted to send these two bills to the full Senate with a favorable recommendation. The vote was 6-1 on both SB 1569 and SB 904. Sen. Judith Zaffirini was the only member of the committee to vote against the harmful bills. We urge educators to contact their senators and ask them to keep these bad bills from becoming law.