The Senate Education Committee met Thursday, April 4, to discuss more than a dozen bills, most of which were related to expanding full-time virtual schools in Texas. The committee also approved the following pending bills: 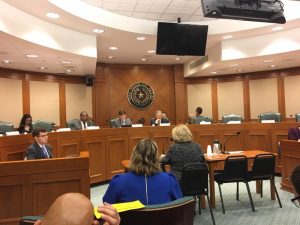 Other bills heard Thursday included SB 2018 by Sen. Royce West (D-Dallas), which would eliminate the committee created last session to dissolve Dallas County Schools, now that the committee's task has been completed.

SB 2431 by Chairman Larry Taylor (R-Friendswood) would create a commission on digital learning that is structured similar to the Texas Commission on Public School Finance. The commission under SB 2431 would meet during the interim to recommend a framework to incorporate digital teaching and learning in public schools.

SB 2433 by Sen. Taylor would move the remaining technology applications courses under the umbrella of career and technical education, which would make additional funding available.

SB 2386 by Sen. Pat Fallon (R-Prosper) would add the completion of a coherent sequence of courses that leads to an industry certification to the indicators of post-secondary readiness under the public school accountability system.

SB 668 by Sen. Bryan Hughes (R-Mineola) and SB 1376 by Sen. Angela Paxton (R-McKinney) contain provisions of a working group of education stakeholders that met during the interim to agree upon ways to reduce mandates imposed upon school districts. As one of the participating organizations, ATPE registered in support of SB 1376, which includes the majority of recommendations made by the working group.

SB 1252 by Sen. Lois Kolhkorst (R-Brenham) is part of a larger push to reform or eliminate local Chapter 313 agreements, which offer businesses tax incentives to locate in a particular community. SB 1252 would require the education commissioner to reduce state funding to districts that receive supplemental funding as a result of a Chapter 313 agreement. Sen. Kolkhorst suggested that districts would be made whole for that lost revenue.

The bills on virtual schools include SB 380 by Sen. Bob Hall (R-Edgewood), SB 947 by Sen. Donna Campbell (R-New Braunfels), SB 2244 by Sen. Paxton, and SB 1455 by Sen. Taylor. Each of these bills would have the effect of substantially expanding full-time virtual schools in Texas. Chairman Taylor offered up a committee substitute for SB 1455 that included some positive provisions regarding vendors, but did not address the large-scale expansion of full-time virtual schools proposed elsewhere in the bill.

ATPE submitted written testimony in opposition to all four bills, pointing to a growing body of evidence that indicates full-time virtual school programs are a poor substitute for brick-and-mortar classrooms. Full-time virtual school programs in Texas have been consistently plagued by performance issues. About 88 percent of the state’s total full-time virtual enrollment, roughly 8,400 students, are served by two providers: Texas Connections Academy, which has been labeled “improvement required” (IR) for three of the last six years, and Texas Virtual Academy, whose campuses have been either not rated or listed as meeting “alternative” standards. The failure rate for virtual schools is far higher than their traditional counterparts. By comparison, just 5.1 percent of campuses statewide were rated improvement required in 2016.