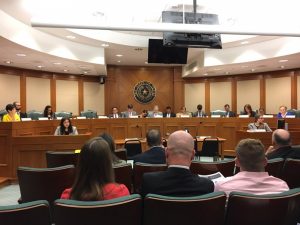 The Senate Education Committee met Tuesday, April 2, 2019, to consider a handful of bills largely focused on dual credit programs. The committee also voted to advance the following pending bills to the full Senate:

The committee heard testimony and considered the following items:

SB 591 by Sen. Kirk Watson (D-Austin) would permanently renew an adult education charter school program that provides adults with the ability to earn their high school diploma. This program has already been running as a pilot, and Sen. Watson's bill would remove the pilot status. ATPE supports this bill.

SB 676 by Sen. Dawn Buckingham (R-Lakeway) would clarify residency qualifications for the purposes of public school enrollment as they pertain to the children of military personnel.

SB 1276 by Sen. Beverly Powell (D-Burleson) would provide for better alignment of dual credit courses between the local school district and partnering institution of higher education. ATPE supports this bill.

SB 1323 by Sen. Taylor would require certain students who are awarded dual credit to complete and submit a free application for federal student aid (FAFSA).

SB 1731 by Sen. Angela Paxton (R-McKinney) would expand the degree requirements for teacher certification to include education majors. This bill was developed jointly by the deans of several state colleges of education.

SB 2073 by Sen. Taylor would clarify that for districts that provide fewer than 180 days of instruction, the number of work days required of teachers can be reduced proportionately without a reduction in pay. ATPE supports this bill.

SB 251 by Sen. Paul Bettencourt (R-Houston) would expand the provisions for a public school to enter into an agreement to provide courses jointly with a junior college.

The Senate Education Committee will meet again Thursday, April 4, to consider a number of bill pertaining to virtual schools. Stay tuned to Teach the Vote for updates.