Below are highlights of some of the main points of the Senate's version of HB 3/SB 4:

During this morning’s explanation of the bill and early testimony by Commissioner Mike Morath and other TEA staff, Sen. Paul Bettencourt (R-Houston) voiced "grave concerns" with the portion of the bill that makes property tax relief through an increase in the homestead exemption contingent upon Texas voters approving a sales tax increase. Sen. Bettencourt, who chairs the Senate Property Tax Relief Committee, argued that such a tax swap would not be neutral, and he suggested alternatives such as expanding the tax base to online sales. 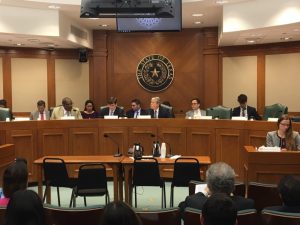 The version of the school finance bill discussed Thursday differs from the version of HB 3 that the House passed by a nearly unanimous vote. The new Senate version brings back outcomes-based funding and the merit pay provisions that ATPE opposed and House members wisely stripped out of HB 3. The Senate version increases the basic allotment to $5,880 versus $6,030 in the House version. The Senate version of HB 3/SB 4 includes a $5,000 pay raise for teachers and librarians, but the Senate proposal currently includes no language to ensure that the educators receive those raises in future years (unlike SB 3 that the Senate passed earlier this session). The property tax relief proposed in the Senate school finance bill includes an increase to the homestead exemption that is contingent upon a sales tax swap, while the House version does not offer an increase to the homestead exemption.

Both the Senate and House versions include additional funding for dyslexia, dual language, and blended learning programs. Both would increase compensatory education funding and would fund based upon a spectrum that acknowledges varying degrees of economic disadvantage. Both versions would base transportation funding on mileage and repeal outdated formulas, such as the cost of education index (CEI) and high school allotment, and roll them into the basic allotment.

The Senate Education Committee will be hearing public testimony on the bill throughout the day. Chairman Taylor indicated that the committee most likely will vote on the bill later next week. Stay tuned to Teach the Vote and follow us on Twitter for updates as the school finance hearing continues today and additional witnesses provide testimony, including ATPE.