It's been a busy week in Austin. Here are highlights from the ATPE Governmental Relations team: 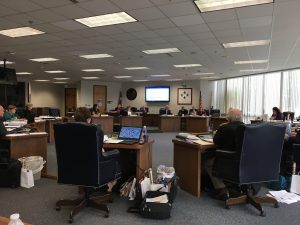 Today culminates the end of a jam-packed week for the State Board of Education (SBOE), and ATPE's lobby team was there throughout the week to testify and provide updates on the board's activities for our Teach the Vote blog. Here are some highlights:

First, on Tuesday the body began its week by convening to discuss controversial social studies TEKS (Texas Essential Knowledge and Skills) that have been the subject of much political debate and social media attention. The board also took time on Tuesday to discuss its Long Range Plan for Public Education (LRP), which sets objectives for education through the year 2030. ATPE Lobbyist Mark Wiggins was on hand to commend the group on its thoughtful process, but also to suggest that the board take steps to increase the rigor of Educator Preparation Programs (EPPs) and insist that teacher pay not be too closely linked to evaluations and test scores. Perfecting amendments to the plan, most of which were in line with ATPE's desired outcomes, were offered by SBOE Chairwoman Donna Bahorich.

The board kept its momentum going into Wednesday when it discussed special education and school funding. With an update from Commissioner of Education Mike Morath, the board learned that quite a bit of progress had been made on the state's corrective action plan for special education with 70% of vacant positions filled. Morath also announced that TEA would be reviewing its contracting process, which comes after the Texas State Auditor's office lobbed criticism at the agency for questionable contracting practices. Morath briefed the board on the A-F ratings that were given to school districts earlier this year. He also noted the decline in "IR" or "Improvement Required" districts across the state. Lastly, Morath informed the board of TEA's Legislative Appropriations Request (LAR), which included two exceptional requests for funding for compensatory services for districts (in order to help them comply with the SpEd corrective action plan) and $50 million in funding for health and safety, $20 million of which is to be earmarked to comply with the governor's school safety plan.

Later Wednesday afternoon, the SBOE also approved the funding distribution from the Permanent School Fund (PSF) for the 2020-21 biennium. Funds will be distributed at a rate of 2.75%. SBOE members expressed concerns regarding the deposit of funds into the Available School Fund (ASF) by the General Land Office (GLO), a move that will result in districts receiving $225 million less per year than normal. Several members of the board suggested actions in response to this action, including asking the GLO to reverse its actions and requesting that the GLO provide extra funding to cover the interest of the distribution.

On Thursday, the SBOE Committee on School Initiatives met to consider a rule proposed by the State Board for Educator Certification (SBEC) that would offer accelerated paths to certification for certain skill sets. The elected SBOE has statutory authority to review all rule actions taken by SBEC, a board whose members are appointed by the governor. SBOE members may veto SBEC rules but cannot make changes to them; SBEC rules for which the SBOE takes no action automatically become effective. For this week's meeting, ATPE Lobbyist Mark Wiggins testified against the SBEC rule change regarding certain teaching certificates on the grounds that it exceeded the scope of the 2017 legislation upon which it was based, House Bill (HB) 3349. The rule change, as approved by SBEC earlier this summer, would have allowed certain educators to circumvent 300 hours of training in areas like pedagogy that are essential to normal pathways to certification. Members of the SBOE committee unanimously recommended rejecting the SBEC rule, and the certification rule change was ultimately rejected by a unanimous vote from the full SBOE board today, which will force SBEC to reconsider its action on implementing HB 3349.

Lastly, the full board met today to approve the first draft of language for the LRP, deciding to wait until November for final approval. SBOE members also finalized a formal letter to the GLO requesting that it cover the funding shortfall caused by its actions. Read more about the board's actions in today's blog post from ATPE Lobbyist Mark Wiggins. 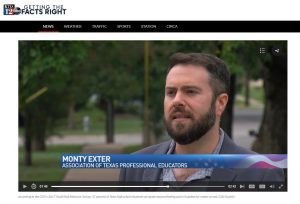 As we have reported previously on Teach the Vote, ATPE has been an advocate for programs and resources to help prevent youth suicide. In 2015, we successfully advocated for the passage of an educator training bill aimed at preventing student suicides. Still, suicide, especially among Texans age 15-34, persists as a public health problem despite laws passed to prevent it. In this news feature by CBS Austin's Melanie Torre this week featuring ATPE Lobbyist Monty Exter, Torre examines why the risk of teen suicide is still on the rise in Texas.

With the 2018 general election inching closer, and a major special election already underway his week in one San Antonio-area legislative district, ATPE wants to remind educators about the importance of voter turnout. Earlier this week, Texas Secretary of State Rolando Pablos released a statement urging voters to make sure they are registered to vote before the October 9th deadline. Pablos encourages Texans to plan their trips to the ballot box and to make sure they know what's on their ballots.

“Prepare yourself, inform yourself, and empower yourself” - Rolando Pablos, Texas Secretary of State.

There's a lot at stake this fall. We urge educators to view and share ATPE's nonpartisan election resources here on Teach the Vote, including searchable profiles of every candidate vying for the Texas Legislature, State Board of Education, Governor, or Lieutenant Governor in 2018.

Meanwhile, early voting has already begun and continues through this evening in the special election runoff to fill the vacant seat in Texas Senate District 19. Those SD 19 residents who miss early voting should play to get out and vote during their last change on Tuesday, Sept. 18th. The candidates in the runoff happening now are Democrat Pete Gallego and Republican Pete Flores. Find polling locations and additional information, courtesy of the Bexar County Elections Department, here.

Tuesday's special election results and the outcomes of several high-profile races on the ballot in November could dramatically change the outlook for education bills moving through the Texas Legislature, and particularly, the Texas State Senate. In recent sessions, Lt. Gov. Dan Patrick has used the combination of a Republican super-majority in the Senate and his heavy-handed brand of managing the upper chamber to usher though a bevy of anti-public education bills, such as private school voucher proposals and legislation to take away educators' rights to use payroll deduction for their voluntary association dues. How those same types of bills fare in 2019 will depend on the outcome of this fall's elections. In this new post, ATPE Lobbyist Mark Wiggins breaks down the calculus of voting this fall.

This week also proved to be insightful in terms of previewing discussions we'll hear during the 2019 legislative session about both the state's education budget and efforts to reform our school finance system.

Both the Texas Education Agency (TEA) and the Teacher Retirement System of Texas (TRS) laid out their Legislative Appropriations Requests (LARs) to the Legislative Budget Board this week. Details and links to video footage of TEA Commissioner Mike Morath and TRS Executive Director Brian Guthrie explaining their respective requests can be found here. ATPE Lobbyist Monty Exter provided additional analysis in this blog post.

Also this week, the Expenditures Subcommittee of the Texas Commission on Public School Finance convened to vote on their recommendations for the full commission. A breakdown of the committee's goals, which include putting more funding into the basic allotment and shifting funds away from programs not directly tied to educational programming, can be found in this blog post by ATPE Lobbyist Monty Exter.