The Texas State Board of Education (SBOE) opened its Wednesday meeting with an update from Education Commissioner Mike Morath.

The commissioner began by praising the board's work on the Long-Range Plan for Public Education, and suggested that there is significant overlap with the agency's own strategic plan. 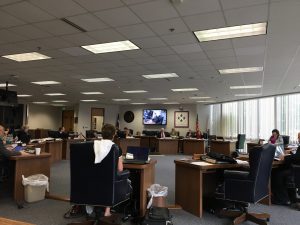 Morath caught members up to speed on the recent debate over a cosmetology course, and indicated that the course is not expected to go away. The commissioner testified he asked staff to look into ways to ameliorate the high cost of the associated licensure.

Regarding special education, Morath claimed progress in a number of areas. The commissioner said the agency has accomplished more than half of the items under the corrective action plan. The agency was tasked with setting up a large field apparatus, and 70 percent of 55 vacant positions have been filled, including all leadership positions. Justin Porter, who helped write the corrective action plan, is the special education director.

A total of 14 grants have been posted, and an additional five have been completed internally and will be finished within the next couple months. Statements of work have been drafted for 15 of the contracts related to strategic plan.

On a separate but related note, Commissioner Morath acknowledged recent contracting issues that resulted in a rebuke from the Texas State Auditor's office, while defending staff involved. Morath state that starting in November of last year, the agency initiated a top-to-bottom review of contracting practices.

With regard to the agency's legislative appropriations request (LAR), in which the agency submits its budget requests for the next biennium to the Texas Legislature, Morath noted that the agency is requesting two exceptional items. These consist of $50 million to support districts providing compensatory services in order to comply with the special education corrective action plan, and roughly $50 million for health and safety, $20 million of which is aligned to the governor's school safety plan.

The commissioner then offered a review of "A through F" school district ratings, which were released in August. Additionally, Morath noted that the state saw a one-year reduction of 247 "improvement required" (IR) campuses. This marks the last set of campus ratings under the "met standard" or IR labeling system, and campuses will instead receive A-F ratings next August.

Finally, Commissioner Morath briefed members on the first TEA annual report on the state of public education in Texas and solicited feedback from members. Relating to teacher recruitment and retention, Morath noted board members will receive a briefing on the Texas lesson study initiative tomorrow.