The House Appropriations Subcommittee on Article III, which oversees the public education budget, met Wednesday at the Texas Capitol to discuss interim charges related to TRS-Care. Chairman Trent Ashby (R-Lufkin) began by noting the roughly $1 billion shortfall facing the system heading into the 2017 legislative session, which lawmakers only partially filled. Without those funds, the system would have been insolvent. The program faces another shortfall heading into the 2019 session, which begins in January. 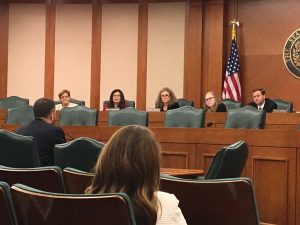 Teacher Retirement System (TRS) of Texas Executive Director Brian Guthrie estimated that the fiscal year ending in 2021 will face a roughly $410 million shortfall, which is down from previous projections. Guthrie explained that TRS-Care is funded as a percentage of payroll, which is not growing at the same rate as health care costs. This is the fundamental reason why TRS-Care has begun to face repeated shortfalls. Retirees have born additional costs as a result of the underfunding, and roughly 30,000 have chosen to leave the program because they can no longer afford to participate.

Guthrie suggested that the best case scenario for TRS-Care would be for the legislature to appropriate an amount more than is needed to simply keep the fund solvent, the excess of which could become the corpus of an investment fund that would be able to provide long-term funding stability, similar to the TRS pension trust fund.

ATPE Lobbyist Monty Exter credited the House and Chairman Ashby in particular for preventing the collapse of TRS-Care last session. Exter suggested allocating additional dollars to the base funding formulas for TRS-Care, as opposed to providing supplemental funding each biennium. Exter shared a story from a retiree whose incontinence medication shot up to $500 after the most recent TRS-Care changes. To that end, Exter suggested expanding the list of free and near-free medications, particularly in maintenance drug categories. In addition, allowing retirees access to café plans or health savings accounts (HSA) would allow retirees to allocate tax-deferred dollars on the front to help with budgeting towards their annual deductible. Finally, Exter noted that preventing retirees from leaving TRS-Care or banning them from returning after testing other private plans violates free market principles and harms consumers.

Beyond TRS-Care, Exter warned of problems associated with TRS-ActiveCare and the pain experienced by active educators who are seeing health care costs rise more quickly than their paychecks. The 86th Texas Legislature will also be faced with issues relating to the TRS pension fund. Both will vie with TRS-Care for attention and resources.

Chairman Ashby indicated that the changes to TRS-Care have generated enormous attention, and voiced optimism that this will lead to positive outcomes for both active and retired educators' health care next session.