The Texas House Committee on Appropriations met Tuesday in Austin to discuss funding for school safety, which Chair John Zerwas (R-Richmond) called one of the most important issues the legislature will take up next session. 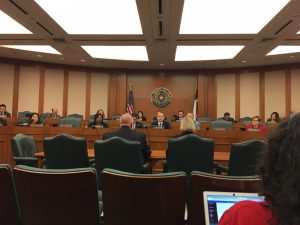 Administrators from Santa Fe ISD, the site of the horrific school shooting earlier this year, were the first to testify. The district has since doubled its security staff, installed panic buttons in classrooms, and modified the design of certain instructional areas. The district indicated that funding for additional officers and counselors has come from the district’s fund balance, and leaders are concerned about long term budgeting.

State Rep. Donna Howard (D-Austin) called the amount of spending Santa Fe ISD has been forced to undertake “sobering,” and suggested that state lawmakers should not compound the burden on local property tax payers by leaving districts to fund school safety measures alone.

Lawmakers also heard from representatives from the Texas School Safety Center (TxSSC) and the Advanced Law Enforcement Rapid Response Training (ALERRT) Center at Texas State University. Representatives indicated that while legislators have cut program budgets, demand for services has increased. Because of this, TxSSC has not been able to address 100 percent of the needs expressed by school districts. State Rep. Helen Giddings (D-DeSoto) stressed the importance of training officers in de-escalation and in how to deal with special needs children.

Texas Education Agency (TEA) Commissioner Mike Morath presented the agency’s plans to address school safety, including a $54 million exceptional item in the agency’s legislative appropriations request (LAR). Morath explained that the actions taken to date as well as the agency’s budget request are aligned to Gov. Greg Abbott’s school safety plan. The commissioner said that federal funds would likely not help pay for school hardening efforts, which would fall instead to state and local taxpayers. Morath also suggested creating safety standards for facilities, such as new schools, that would force compliance.

State Rep. Armando Walle (D-Houston) questioned how far $54 million will go when spread statewide, given the testimony that Santa Fe ISD alone spent more than $30 million on safety improvements. Rep. Walle also suggested that if the state is going to gather data on students, lawmakers should also consider ways to ensure students faced with mental health emergencies do not have unfettered access to firearms.

The committee heard additional testimony from the governor's Criminal Justice Division (CJD), the Department of State Health Services (DSHS), and the Legislative Budget Board (LBB). The LBB pegged the total of various agencies' appropriations requests at around $100 million.

Finally, the committee received an update from the TEA regarding the agency's implementation of corrective action to ensure students with special needs are being adequately served. This is a result of the U.S. Department of Education finding the state instituted a de facto cap on special education enrollment and failed to comply with federal law mandating the state provide special education services to all children who qualify.

Agency staff testified that districts are seeing an uptick in special education enrollment. As part of the corrective action plan, the agency is developing a rubric for schools seeking additional funding in order to provide special education services as they are required under federal law. Staff testified that each percentage point that special education enrollment increases will cost $342 million per year. In addition, staff said there are currently not enough trained staff in the state to evaluate all of the children who theoretically could be served.