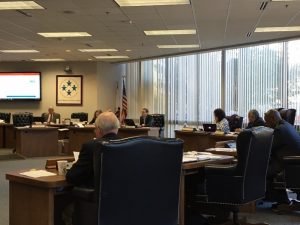 The commissioner praised the board for its handling of a funding dispute with the General Land Office (GLO) over the Permanent School Fund (PSF), formal oversight of which is split between the SBOE and the GLO’s School Land Board (SLB). Morath suggested legislators should address oversight of the PSF in its entirety. The commissioner pointed out that the PSF portion under the SLB’s stewardship has accumulated a $4 billion cash balance, which is creating a “significant drag” in terms of fund performance. Morath suggested legislators should consider structural changes, which could be worth an additional $150 million per year.

Commissioner Morath recapped the agency’s budget and priority initiatives, and disputed reports that the agency’s legislative appropriations request (LAR) calls for a reduction in state aid. The LAR is a formal budget request each agency prepares for legislators before each legislative session, and TEA’s LAR for the upcoming session seeks less state aid from general revenue (GR). The commissioner explained that this is required by the funding formulas, which have led to the burden shifting from state GR to local property tax revenues.

Member Ruben Cortez (R-San Antonio) pressed the commissioner as to whether that trend will continue. The commissioner repeated that the agency is complying with statute, and suggested this is the central question being addressed by the school finance commission.

Member Marisa Perez-Diaz (D-Converse) asked the commissioner to provide agency guidance for districts participating in or considering merging with charters under Senate Bill (SB) 1882, which was passed by the 85th Texas Legislature. Perez-Diaz noted that there are questions regarding who is formally in charge of schools at the local level after a contract with a charter is executed, and pointed out it seems districts are “building the plane while it’s in the air.” The commissioner said SB 1882 contracts now include 13 districts and 609 campuses.

In response to a question by Member Ellis regarding a ruling by the 5th Circuit Court of Appeals to uphold a $33 million penalty for failing to properly fund special education, Commissioner Morath indicated that the agency is actively trying to figure out its response moving forward.

The commissioner also fielded a question from Member Georgina Perez (D-El Paso) regarding the instructional materials portal, which legislators in 2017 ordered the commissioner to create as an online resource for educators. Perez noted there is concern how the portal will interact with the SBOE's statutory authority to review instructional materials and the potential for creating duplicative processes. Commissioner Morath suggested the portal will evaluate a different set of factors than the SBOE.

Member Barbara Cargill (R-Conroe) also raised concern about transparency with regard to how portal material is evaluated, and clarifying that the board's process will continue forward unchanged. The commissioner replied the agency is engaged in stakeholder outreach. Member Cargill suggested creating a frequently asked questions (FAQ) document.