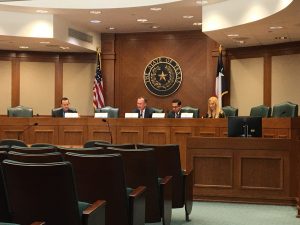 Schwinn testified that online tests are cheaper and suggested there could be some security benefits by reducing the potential for physical tests getting lost in the mail. Sen. Taylor suggested online tests would give districts more flexibility in determining test dates and allowing follow-up tests later in the school year. Rep. Bernal stated concern over connectivity, in particular with regard to districts that may not have reliable internet access. Schwinn noted that recently-passed legislation allows districts to spend instructional materials allotment (IMA) funds on technology.

According to Schwinn, only 59 percent of Texas children are “kindergarten-ready.” Just 45 percent meet grade level expectations in third grade reading. The overwhelming data show students with high quality early childhood education are significantly more likely to graduate from school. According to Schwinn, funding universal pre-K for four-year olds would cost the state $1.7 billion. Universal pre-K for three- and four-year olds would cost $3.4 billion.

Alief ISD Superintendent H.D. Chambers appealed to the group to provide the necessary funding to achieve the desired outcomes of policymakers and practitioners. Chambers indicated that educators must also be paid better salaries. Barring these, Chambers warned that efforts to institute better education policies will be doomed to fail.

With regard to early childhood education, Chambers attributed improvements in kindergarten readiness in Alief ISD to better professional development for pre-K teachers and putting better quality teachers in pre-K classrooms. Chambers suggested public-private partnerships could be a viable option without additional state funding for pre-K. Chambers also affirmed there is a meaningful difference in quality between alternatively certified teachers and those trained by traditional programs, despite an increase in the employment of less qualified alternatively certified teachers.

Sen. Taylor made clear that any increases in teacher pay should not be across the board, rather they should go to the highest performers. Martin, a teacher, noted the overwhelming pressure placed upon teachers, not to mention the steadily increasing costs of health care without a commensurate increase in pay. Chambers testified the state is in the middle of a “teacher crisis” in which not enough qualified teachers are available to meet the demands of schools.

On the subject of testing, Chambers questioned whether the STAAR is as useful and accurate as previous tests such as the TAAS and TAKS. While Texas schools saw steady improvement on the previous tests, Chambers pointed out that STAAR scores have stagnated. Killian joined this theme by raising concerns over the usefulness of STAAR data compared to previous tests.

The full commission will meet Thursday.