The House Committee on Public Education met Thursday morning at the Texas Capitol to discuss interim charges related to testing and special education. The interim charges are assigned by Speaker Joe Straus (R-San Antonio) and are generally composed of a detailed list of topics for each standing committee to research and discuss before the next legislative session. The following charges were on Thursday’s agenda:

After updating the committee on the Texas Education Agency’s (TEA) response to the Santa Fe school shooting and recent STAAR test glitches, Commissioner Mike Morath began his testimony by summarizing the overall design of the STAAR test and Texas Essential Knowledge and Skills (TEKS) upon which tests are based. Morath pointed to one idea, splitting the STAAR test into sections to allow more flexible scheduling, that he suggested may require legislative guidance before ordering further agency research. 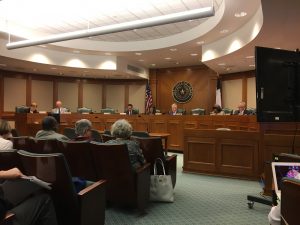 Members of the committee raised questions about the writing test, in particular with regard to grading methods. Morath indicated that a writing program created as a result of legislation by state Rep. Gary VanDeaver (R-New Boston) has yielded useful information, and noted that additional appropriation to continue the program would be a positive step.

Rep. VanDeaver asked Morath how much money could be saved by eliminating standardized tests that are required by the state, but not by federal law. House Bill (HB) 515 filed by VanDeaver during the 2017 legislative session would have eliminated tests not mandated under the federal Every Student Succeeds Act (ESSA), and was estimated to result in a savings of $7 million. The bill was ultimately unsuccessful.

Other invited testimony included a panel of superintendents who testified to the overreliance on standardized tests for everything from student advancement to school accountability. Granger ISD Superintendent Randy Willis asked the committee to consider eliminating a single summative assessment at the end of the year in favor of multiple formative assessments and reducing the number of assessed standards. Doug Williams, Superintendent of Sunnyvale ISD, voiced support for dividing the STAAR into sections, ongoing diagnostic assessments, and making substantial changes to the writing portion of the exam. Part of the panel discussion touched on allowing teachers to directly grade writing exams, in other to provide better feedback and analysis.

ATPE Lobbyist Monty Exter testified before the committee on the specificity of the TEKS, teaching versus testing, and corollary applications to the teacher pipeline. Other public testimony focused on portfolio assessments, such as rubrics developed by the New York Performance Standards Consortium. 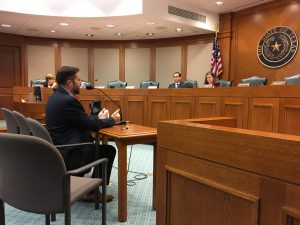 After a brief break, the committee turned its focus to special education. TEA Deputy Commissioner Penny Schwinn walked members through the corrective action plan prepared by the agency to address the de facto cap on special education enrollment that resulted in a federal rebuke. Schwinn emphasized that current and future guidance indicates students with dyslexia should not be arbitrarily confined to Section 504 programs, but may qualify for special education services depending on the individual.

A number of advocacy organizations were invited to testify regarding the agency’s actions. Among the concerns raised by special education advocates was the timeline for implementation. Chris Masey with the Coalition of Texans with Disabilities presented the dichotomy between progress at the policy level and frustration felt by parents looking for meaningful results. Masey also noted there hasn’t exactly been a surge in special education enrollment after the cap was lifted. Heather Sheffield with Decoding Dyslexia suggested policymakers explore a way to enforce the Dyslexia Handbook developed by TEA.

Additionally, advocates asked for per-pupil funding for dyslexia, as well as having adequate instructional time and funding for both training and staffing. One advocate testified that training alone for a special education teacher can top $5,000. ATPE Lobbyist Monty Exter thanked the committee for the work done last session to address the cap, as well as funding weights for special education. Exter drew the committee’s attention to districts’ ability to provide external services already. While therapeutic and educational services are both available, the primary focus of special education should be on educational services, and any therapeutic services covered by district or state funds should be in furtherance of the educational objectives.