As he testified in Thursday’s meeting of the full commission, Texas Education Agency (TEA) Chief School Finance Officer Leo Lopez testified the total state special education allotment in fiscal year 2018 is estimated at over $3 billion. This allotment is distributed according to subordinate weighted funding calculations for different instructional settings and is tied to contact hours. This year, 490,000 students are enrolled in special education, marking an increase of 40,000 since lawmakers ended TEA’s de facto 8.5 percent cap on special education enrollment. 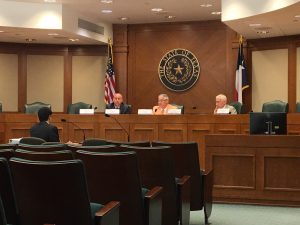 Steven Aleman with Disability Rights Texas (DRT) and Kristin McGuire with the Texas Council of Administrators of Special Education (TCASE) testified that special education is a service, not a place. Furthermore, they testified that the current weights are outdated and the funding formula is not transparent. McGuire said inclusive settings are almost always the most desired outcome, but the system is not set up with this in mind. The current funding weights haven’t been updated since 1993.

McGuire noted that many dyslexic students are not receiving adequate services, and the State Board of Education (SBOE) is in the process of updating the dyslexia handbook. Commission and SBOE Member Keven Ellis (D-Lufkin) confirmed the board hopes to finalize a new handbook in the fall.

Aleman suggested reducing the number of steps involved in calculating special education funding, which could save districts money currently spent on consultants need to aid in navigating the funding process. Aleman also suggested undertaking a systemic study of the costs of weights, settings and services, and suggested weights should be updated. Additionally, the state should move toward a service intensity-based funding system, as opposed to a setting-based system, and should extend special education services to students with disabilities that are currently classified differently, such as under Section 504.

Responding to questions from the working group members regarding the true cost of special education services, McGuire said advocates nationwide have struggled to get a concrete handle on the subject. Huberty indicated that advocates need to offer hard numbers if they believe additional funding is necessary.

Justin Porter, Executive Director for Special Populations at TEA, responded to a number of questions from the board. Porter testified that children struggling with reading or math who may not have exhibited a clear disability and are currently served through interventions would be the most likely population to comprise a majority of students entering the special education program as a result of doing away with the special education cap. Huberty noted these would likely be students with dyslexia, autism or related disorders. Dyslexic students are served by the special education system in many other states, but that is not the case in Texas.

Regarding Section 504, Porter said TEA has no authority over 504, but is trying to offer more guidance to school districts in this area. Porter suggested 504 protections are generally offered to students in need of a variety of accommodations, such as those suffering from food allergies.

Huberty concluded by suggesting that providing resources for parents to spend outside the classroom may be more effective than increasing resources in the classroom, and suggested advocates bring more solutions to the table.