Chairman Dan Huberty (R-Houston) opened Thursday's interim meeting of the House Committee on Public Education by acknowledging the tragic school shooting in the town of Santa Fe, south of Houston. The chairman invited Texas Education Agency (TEA) Commissioner Mike Morath to update the committee on the agency’s response to date. 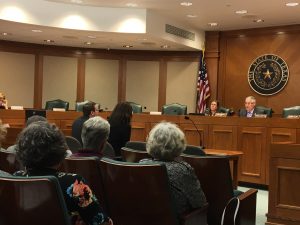 Morath indicated that the agenda is providing attendance waivers and working to secure federal school violence funds for Santa Fe ISD. The commissioner is participating in a series of roundtable discussions on school shootings hosted this week by Gov. Greg Abbott, and testified that he is evaluating ideas raised in these discussions to determine which are actionable. While some ideas could be implemented by the agency, others would require legislative action.

“The challenges are legion,” said Morath, noting that Texas is home to some 8,600 school campuses.

Asked by Chair Huberty to explain the delay in information reaching Santa Fe High School parents on the day of the shooting, Morath explained medical reporting on casualties and the process of investigating and securing the premises both took time. Morath pointed out the response included 12 law enforcement agencies, and suggested more interdisciplinary drills could be helpful.

Wrapping up the discussion, Huberty indicated that he has been involved in talks with other state leaders to develop a joint effort to address school shootings next session.

Huberty also asked the commissioner to update the committee on the most recent glitch during STAAR test administration. Morath said the latest involved 29,000 mostly special education students who were taking the test online. A subcontractor for ETS, the test administrator, was performing a “bug fix” that resulted in servers dramatically slowing down. The agency is issuing a letter to administrators regarding the problem and is waiving School Success Initiative (SSI) requirements for Fifth grade students affected by the glitch. These 29,000 students will be factored out of local and district accountability unless including them would raise campus and district scores.

Huberty pointed out this is the second year in the past three to see problems under the ETS contract. Morath testified the agency has levied a $100,000 fine against ETS and will rebid the contract beginning in June.