Here is this week's wrap-up of education news from ATPE:

Tuesday was primary Election Day in Texas, and there is a lot to unpack. ATPE Lobbyist Monty Exter has an inital analysis of the primary results here, and he highlights two major takeaways after Tuesday night: voter turnout increased and incumbents did well.

Voter turnout hit record highs in both parties. Like Exter points out in his post, a Texas Educators Vote Coalition statement praising voter turnout in the primary election also notes that turnout increased across Texas by almost 700,000 voters compared to the most recent midterm primary election in 2014. The number of Democratic voters getting to the polls exceeded 1 million, while Republican voter totals topped off at more than 1.5 million. Both parties saw an increase in their voter turnout, with Democrats nearly doubling the total number of voters since 2014 (a number that represented a midterm primary record high for the party not hit since 1994). Republicans experienced a more modest increase in the largely red state, but the party's turnout still represented record numbers.

As a proud member of the Texas Educators Vote Coalition, ATPE is thrilled to see the uptick in civic engagement and encourages educators and other voters to maintain that energy through November and future elections. ATPE was also excited to see a large percentage of ATPE-supported candidates prevail in their elections; Exter's recap of the election has more on those results. While many are focused on the bigger races at the top of the ticket, it is important to consider all of the great candidates elected further down ballot. One thing is clear based on voter turnout, the energy built among educators, and the impact already felt: this movement is only beginning! 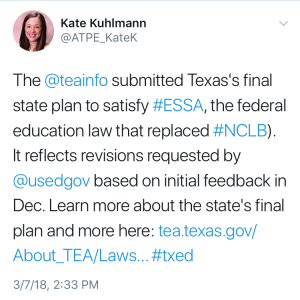 The Texas Education Agency (TEA) submitted Texas's final state plan to satisfy the new federal education law, the Every Child Succeeds Act (ESSA), this week. The final plan has been in the making for quite some time. Here is a quick recap:

The final plan submitted this week reflects a number of revisions required by ED in their initial feedback. TEA's press release announcing this week's submission can be read here. To read the final plan or learn more about the Texas ESSA plan and related content, visit TEA's ESSA web page. The plan must now receive a final review by Secretary Betsy DeVos, but she is not tied to a certain time period for revisions. On Monday, DeVos addressed members of the Council of Chief State School Officers at their annual conference, offering them "tough love" over what she considered state ESSA plans that lacked creativity and innovation.

ATPE submitted comments this week on new proposed Commissioner's rules regarding certain out-of-state educators. These rules would exempt educators that are certified out of state and who meet certain qualifications from Texas required certification assessments as they work to obtain certification in Texas. The rule proposal stemmed from legislation passed last session. ATPE encouraged the commissioner to raise the standard from one to at least two years of experience in order for an out-of-state educator to benefit from the exemption. ATPE Lobbyist Kate Kuhlmann writes more about ATPE's comments, the proposed rules, and context for the legislation here. 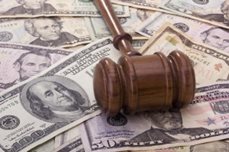 The Texas Commission on Public School Finance met again in Austin this week, this time to discuss "efficiency" at the classroom, campus, and district levels. A panel of invited witnesses was dedicated to each category. The classroom efficiency panel focused on blended learning, while the campus efficiency panel featured partnerships with charters and higher education. The district efficiency panel largely entailed discussions regarding charter schools. ATPE Lobbyist Mark Wiggins attended the meeting and has a full report here.