The Texas Commission on School Finance met for the fourth time Wednesday in Austin. After a late start due to members trickling in the day after the state’s heated primary elections, the commission quickly launched into a debate about just how much of its activities will be open to members of the public. 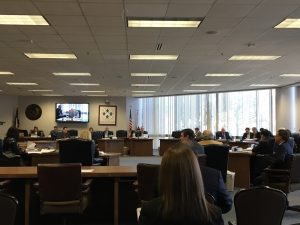 Chairman Justice Scott Brister began by informing members of the commission that commission subcommittees will be free to hold meetings without posting notice to the public. Brister gave members specific guidance in order to avoid having to comply with state open meetings laws, and led a vote expanding the number of members who can attend committee meetings out of the public eye.

The committee also discussed logistics for the next meeting, March 19, when members of the public will be able to testify. Before public testimony, the commission plans to invite various stakeholders and interest groups to testify for up to five minutes. Brister stated the list of potential invited witnesses compiled by members and Texas Education Agency (TEA) staff numbered roughly fifty, and asked for help whittling down that number. He warned the March 19 meeting will be long, and members should expect to work well into the evening hours. Sen. Bettencourt asked to reduce the amount of time allotted to public witnesses to avoid a lengthy meeting, and Brister expressed interest in doing so based upon the number of witnesses who sign up.

The topic of Wednesday’s meeting was “efficiency,” with panels dedicated to efficiencies at the classroom, campus and district levels. The first panel featured witnesses from Cisco and Pasadena ISDs to discuss blended learning programs, which combine classroom time with self-paced digital learning incorporating technology such as computers and tablets. Todd Williams, an advisor to Dallas Mayor Mike Rawlings, asked whether blended learning would enable a single teacher to teach more students. Pasadena ISD Deputy Superintendent Karen Hickman indicated that may be possible, but had not been her district’s experience.

The next panel featured witnesses from Pharr-San Juan-Alamo ISD, along with Dallas County Community College and the Dallas County Promise program. College partnership programs allow students to earn industry credentials or college credits by taking courses through local higher education institutions. While praising the work of PSJA ISD, Williams suggested college completion rates in these programs are not always where many would like to see them. DCCC Chancellor Joe May testified that the Dallas program is an efficient way to get students to a four-year degree at a quarter of the typical cost.

The final panel on district-level efficiencies was led off by San Antonio ISD Superintendent Pedro Martinez, who highlighted new innovative campuses and advanced teacher training. Martinez made a compelling argument against basing too much accountability on end-of-course exams, pointing out that SAT scores have a far greater impact on the future trajectory of individual students. Martinez also laid out a nuanced way of tracking income demographics for the purposes of equalization within the district. More controversially, Martinez discussed bringing in charter operators from New York to take over a local elementary campus. These types of arrangements receive financial incentives from the state as a result of SB 1882, which was passed by the 85th Texas Legislature despite warnings raised by ATPE over the potential negative impacts on students and teachers. In consideration of these criticisms, Martinez suggested adding Dallas ISD’s ACE model or similar teacher retention programs as a third option under SB 1882. Martinez further acknowledged that charters are not interested in taking on the task of educating the most economically disadvantaged students.

The commission also heard from Paul Hill, a Washington-based policy consultant whose work has been affiliated with handing campuses over the charters and supporters of broader education privatization, including vouchers. Midland ISD Superintendent Orlando Riddick spoke of districts of innovation (DOI), and confirmed that districts are eager to waive requirements for maximum class sizes and teacher certification. ATPE has repeatedly warned of DOI being used to hire cheaper, uncertified teachers and assign larger classrooms.

The meeting ended with testimony from IDEA Public Schools charter founder Tom Torkelson. While acknowledging that well-trained teachers should earn more money, Torkelson also suggested that class size limits designed to protect students should be waived in order to place more students in a single classroom. Torkelson also suggested eliminating regional education service centers (ESCs), which were designed to increase efficiency by consolidating various support tasks in order to service multiple districts. Torkelson gave no indication what should replace the ESCs in his estimation.

State Rep. Dan Huberty (R-Houston), who chairs the House Public Education Committee, concluded Wednesday’s hearing by directing members to the task at hand: Finding a way to pay for public education for all Texas students. Anything short of that, he reminded members, will not help Texas out of its current predicament. The commission will next meet March 19, and members of the public will be allowed to testify.