From The Texas Tribune: Will Texas school finance panel tell schools to do more with less? Some members think it's predetermined 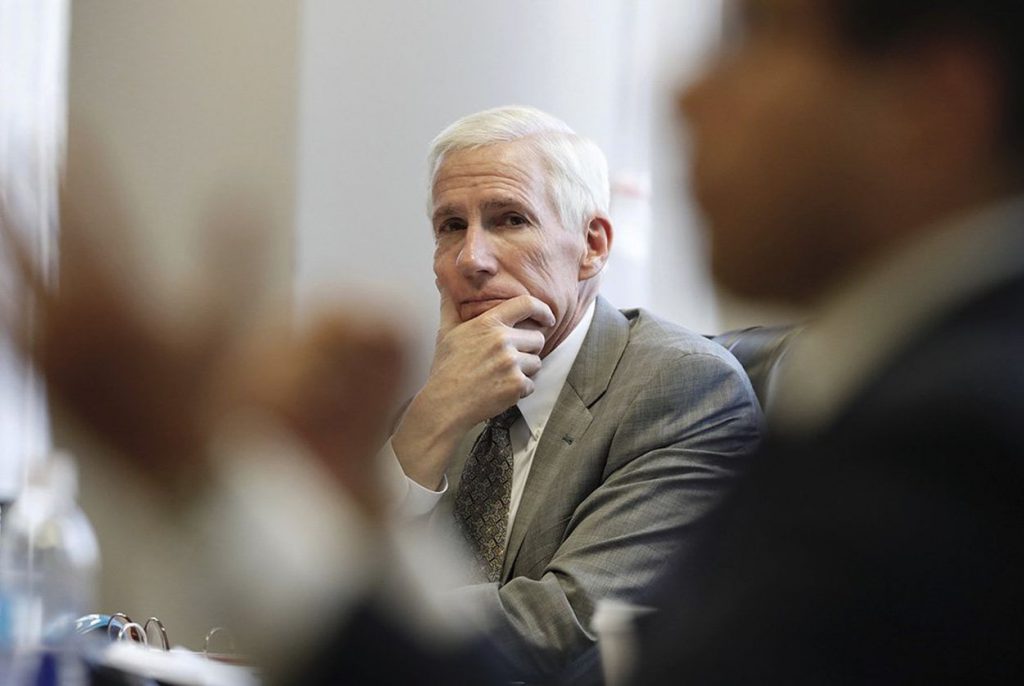 Justice Scott Brister, chairman of the Commission on Public School Finance, listens to a commission member at the panel's second meeting Feb. 8, 2018. Photo by Bob Daemmrich for The Texas Tribune.

A state panel responsible for proposing improvements to Texas’ embattled public school finance system is facing criticism from an unexpected source: some of its own members, who say the panel’s hearings seem geared toward a predetermined outcome of making schools do more with their current funding.

Texas school districts have repeatedly sued the state over the past few decades, arguing it hasn’t provided enough money to ensure public school students an adequate education. During the 2017 session, lawmakers failed to make immediate changes to how the state allocates money to public schools — and instead agreed to create a 13-member commission to undertake a longer-term study.

That panel, which includes appointees from House Speaker Joe Straus, Lt. Gov. Dan Patrick, Gov. Greg Abbott and the State Board of Education, has held four hearings since it was assembled in January. Its next hearing is scheduled for Monday.

In those hearings, some commission members argue, presentations by experts have been skewed toward making the case that schools do not necessarily need more money to produce better outcomes for students.

“There’s a steady stream of presenters … trying to convince us that there’s enough money in the system and that adding more will not show results — that districts are essentially spending the money incorrectly,” said State Rep. Diego Bernal, D-San Antonio, one of four members appointed by Straus.

He said the commission has also heard from school leaders with innovative ideas, such as how to keep the best teachers at the most challenging schools and how to use full-day pre-K to get students at an academic baseline early in life.

“Those two things without question cannot be funded or sustained with the current funding levels we have,” Bernal said. “Even the districts that piloted it said they were about to run out of money.”

But the panel’s chair, Scott Brister, disagreed that the hearings were staged for any predetermined outcomes. He said the Texas Education Agency’s staff has worked to bring experts who can provide a framework for how school finance works and what an adequate education looks like.

“You’ve got to figure out what you would like the schools to look like before you figure out whether you need more money or less money or where that money’s going to come from,” said Brister, a former state Supreme Court justice. Appointed to the commission by Abbott, Brister was the sole justice to dissent in a 2005 lawsuit brought by school districts claiming the school finance system was inadequate and inefficient. The court ruled in favor of the districts and forced lawmakers to overhaul the funding system.

“I’m not interested in spending more money and getting no change. What’s the point of that?” Brister said this week. “The Constitution requires school districts to be free and efficient. … Surely it means you don’t waste money on stuff that doesn’t work and doesn’t make a difference. That’s one of our constitutional standards. We have to consider it.”

Over the past decade, the state has decreased its share of public education funding, allowing rising local property taxes to make up the difference. Currently, less than 40 percent of school funding comes from the state, while local property taxes pay for more than half. In 2011, lawmakers cut more than $5 billion from schools to close a budget deficit and never completely restored the money.

Texans will have their first, and potentially only, chance on Monday to publicly address the commission. Texas school leaders and public education advocates are expected to spend several hours, if not the whole day, testifying that they want the state to invest more money in public schools, instead of relying on local property tax revenue, and that they cannot educate students on the budget they have.

“Only after you get past that question [of adequate funding] do you get to talk about how to spend that funding,” said Monty Exter, a lobbyist at the Association of Texas Professional Educators, who plans to testify Monday. Exter said he sees three different groups on the commission: one that wants to increase funding to public schools, another that believes public schools are important but that increasing funding isn’t feasible, and a third that wants to defund public schools.

“My argument is that you haven’t funded us enough to get better outcomes,” said Nicole Conley Johnson, a member of the commission and chief financial officer of Austin ISD.

According to the TEA, Austin’s school district is expected to pay the state $545 million this school year to help subsidize poorer school districts, through a function of the school finance system nicknamed “Robin Hood.” Austin ISD has the highest Robin Hood payment in the state and has gone through several rounds of budget cuts over the last few years.

Johnson, who was appointed to the commission by Straus, agreed that the commission hearings seem to be skewed toward efficiency: “They want more for the same amount of resources.”

He suggested the state look into why certain school districts do better with less funding, and why others do worse with more. “Scholars and education experts are divided on the extent to which there is a demonstrable correlation between educational expenditures and the quality of education. The thing that matters is student outcomes,” based on test scores or high school graduation rates, he said.

Johnson and fellow commission member Doug Killian, the superintendent of Pflugerville ISD, pushed back on Enoch’s chart, pointing out the data was outdated and not comprehensive.

Chandra Villanueva, policy analyst at the left-leaning Center for Public Policy Priorities, said the commission should be trying to ask what schools need to educate students, instead of asking what they can do with existing resources. “Let the Legislature decide if they want to raise taxes or shift other priorities in the budget,” she said. “I don’t think the [commission] should prematurely tie their hands.”

The commission will split into three subcommittees to brainstorm recommendations to the Legislature at the end of the year on where the state should get revenue to fund public schools, how it should overhaul existing formulas to allocate funding more equitably, and what it should expect its public school students to achieve. Each subcommittee will get to decide whether and how to include the public in its discussions, according to Brister.

Sen. Paul Bettencourt, a Houston Republican chairing the panel’s revenue subcommittee, said it’s too early to say what those recommendations will look like.

“We’ve been drinking from the fire hose on public policy. I haven’t had any discussions with anybody yet to step back and get out of the line of fire and see where we are now. For me personally, I’m still in listening mode,” he said.

Disclosure: The Association of Texas Professional Educators and the Center for Public Policy Priorities have been financial supporters of The Texas Tribune, a nonprofit, nonpartisan news organization that is funded in part by donations from members, foundations and corporate sponsors. Financial supporters play no role in the Tribune’s journalism. Find a complete list of them here.

This article originally appeared in The Texas Tribune at https://www.texastribune.org/2018/03/16/school-finance-efficiency/.