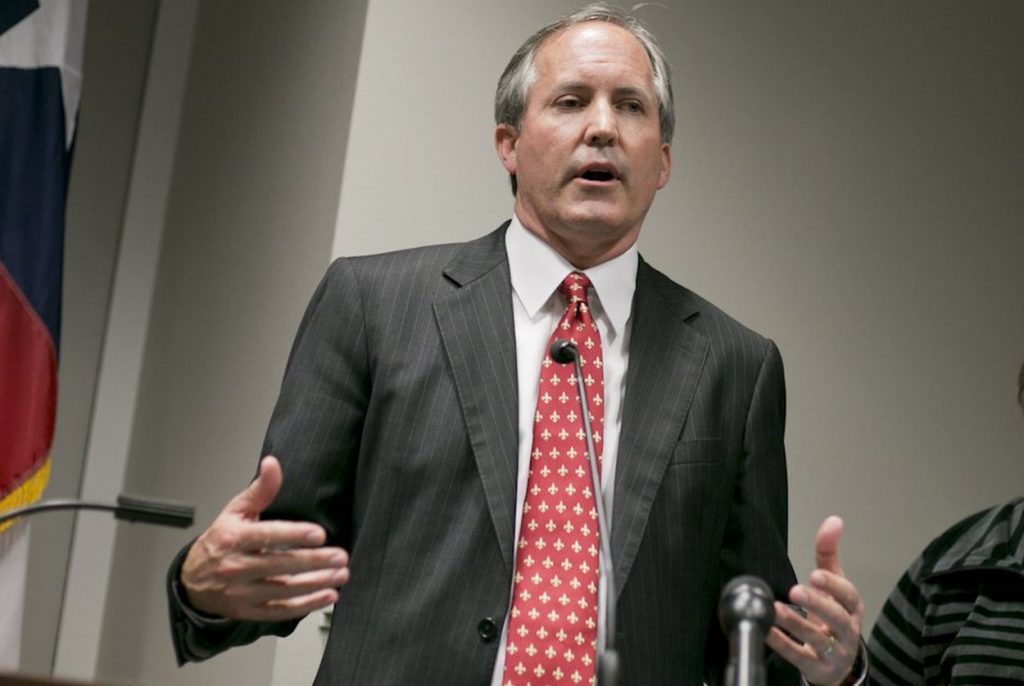 All three seemed aimed at warning Dyes — the superintendent of Holliday ISD, a North Texas school district that enrolls just over 1,000 students, employs just over 100 staff, and occupies just under 300 square miles — to stop his “illegal electioneering.”

That was not what Dyes thought he’d been up to in the months leading up to Texas’ March 6 primary election.

“All I was trying to do in any of that — on Twitter, or in communications with my staff or the public — was to advocate for public education,” he said.

Dyes suspects that it was his Twitter presence, where he often retweets educators pledging to “#blockvote” in favor of pro-public education candidates, and that of the district, that drew Paxton’s attention.

Dyes was one of more than a dozen administrators whose districts were hit last month with open records requests from the Texas Attorney General’s Office seeking district communications about Texas primaries, voting and certain candidates and races, documents obtained by The Texas Tribune in a records request show.

And he was one of a smaller group of educators whose district also received a cease-and-desist letter from Paxton, the state’s top lawyer. After sending three letters last month, Paxton’s office sent two more Friday morning — to Elgin ISD and Galena Park ISD, both districts that had received records requests — asking administrators to stop using taxpayer money to advocate for political candidates.

“School districts violate the Texas Election and Education codes when they exhort faculty or others to vote for a particular person or ballot measure,” Paxton said in a statement Friday. “Spending taxpayer dollars on advocating for or against political candidates is unacceptable.”

The letters are just the latest salvo in an ongoing battle over the role Texas public schools play in elections. Long-standing civic engagement initiatives aimed at getting more Texas teachers out to vote have come under fresh attack this election cycle, with conservative groups and Paxton himself warning that some efforts constitute “illegal electioneering.” A January ruling from his office advised districts that busing teachers and voting-age students to polling places is illegal unless such trips serve an “educational purpose.”

The records requests probe school administrators’ words and actions in an effort to identify illegal activity committed on the taxpayers’ dime. Public school employees can register students to vote and promote civic engagement, but they’re not allowed to use public money or other resources to support particular political candidates or parties.

The AG’s office did not return requests for comment on the records requests themselves, but has said several times it’s investigating complaints of election law violations and will continue to do so. But educators and advocates see a political motivation behind the probes, and the other missives that preceded them.

“To me it’s voter suppression — an attempt to bully us,” Troy Reynolds, the founder of Texans for Public Education and an administrator in Splendora ISD, which did not receive an AG request last month. “I’ve never seen anything like this before… They’re trying to shut us up.”

But state Sen. Paul Bettencourt, the Houston Republican who asked Paxton in December to weigh in on whether schools could bus employees to the polls, said claims that Paxton’s work is politically motivated are “an emotional response not based in reality.”

“When I see political activity not just creeping into schools but galloping into schools, you just gotta pull the reins and stop it,” Bettencourt said, adding that Paxton is merely working to ensure schools “educate the kids, not get into politics.”

Paxton’s office’s recent inquiries went to school districts of all sizes all across the state. Many requests were broad, asking for communications among top school officials that included words like “vote,” “voting,” “Texas Legislature” and “primary.” The AG’s office also sought campaign emails and information about “get out the vote efforts.”

While Paxton’s office said it’s targeting suspected lawbreakers, educators and advocates have pointed out that many were sent to the sites of tight Republican primary races, including two districts — Frisco ISD and Allen ISD — that fall into Senate District 8, where Paxton’s wife Angela Paxton recently won an expensive, hard-fought Republican primary against Phillip Huffines.

Granbury ISD — whose superintendent, Jim Largent, had the backing of many in the education community in his unsuccessful challenge against state Rep. Mike Lang — received three separate requests from the AG. Lang, a member of the conservative House Freedom Caucus, had the support of Empower Texans.

The AG’s office asked Granbury ISD for a copy of an email from Largent to district staff announcing his campaign and another from the superintendent containing the words “Their goal is to demonize and destroy public education and it is working.”

“One could probably connect the dots and come up with some theories about what they were doing,” Largent said in an interview this week.

Many requests also honed in on another Republican race: the face-off between sitting Lt. Gov. Dan Patrick and challenger Scott Milder, a public education advocate backed by many in the education community. Milder ultimately lost to Patrick by more than 50 percentage points.

Milder said he sent campaign emails to about 100,000 educators, and those messages appeared in response to several of the AG’s requests. A disclaimer at the top of one Milder email advises recipients that “forwarding this email would be considered a violation so please do not forward from district email or device,” but merely receiving the email at a district address “is not a violation of any law.”

Some district administrators took care to pass the email along from their personal email addresses, records show. But others shared it from their official district addresses.

Joe Coleman, a principal in Galena Park ISD, was cited for doing just that in Paxton’s second round of cease-and-desist letters Friday.

“I agree that we need to support Scott Milder in his quest to become the Texas Lieutenant Governor,” Coleman wrote, passing along Milder’s email. “Remember, to ask for Republican Ballott, you can vote in Texas in the primaries for a Republican or Democrat. Let’s support Scott Milder. Please tell all of your friends and family this is critical.”

Coleman wrote back the next day: “I probably broke some type of rule with this email, probably not good judgement. I have not had a complaint but just letting you know in case you get one. Joe.”

Milder said it was “thoroughly disappointing” that Paxton would go to such lengths to “intimidate educators” out of voting.

Some advocates allege that the process behind the AG’s office sending the requests was political as well.

Before the AG’s office began submitting records requests, school districts had already received similar inquiries from conservative groups, including the aggressive and influential Empower Texans. The Texas Civil Rights Project, a voting-focused advocacy group, pledged this week to “shine a light on any coordination” between the groups. Empower Texans did not return a request for comment on this story.

Dyes said the coordination is obvious. In October, his district signed on to a “culture of voting” resolution. Dyes said his office turned the signed resolution over to Empower Texans when that group submitted a records request, but that the document wasn’t posted anywhere online.

Then, a copy of the signed resolution appeared in the cease-and-desist letter Paxton’s office sent to Holliday ISD last month.

“They must be working together,” Dyes said. “Evidently somebody in Empower Texans gave them that resolution… because it’s not available anywhere else.”

“I don’t believe that’s an accident at all. I think there’s an agenda behind it,” he said. “It’s so they can maintain the power they have in the Legislature and push vouchers. No one’s ever had a problem with public sector employees activating before.”

Some educators suspect that the new scrutiny on their election-related activities is motivated not by a concern for the law, but a concern that education-backed candidates could unseat many of the Legislature’s most conservative members. After lawmakers failed to deliver the school finance overhaul many sought during last year’s legislative sessions, educators pledged to come out to the polls in force this election cycle.

Educational advocates said those numbers had begun to scare those in power — although last week’s primary results suggest educators’ numbers were not as high as some anticipated.

“I think it’s absolutely politically motivated,” said Laura Yeager, whose educational engagement group’s years-old voting resolution has been attacked for the first time this election cycle as suspicious and illegal. “It’s just so disappointing. Really, they should be encouraging people to vote…. This is not what our country is supposed to be about.”

Disclosure: Laura Yeager has been a financial supporter of The Texas Tribune, a nonprofit, nonpartisan news organization that is funded in part by donations from members, foundations and corporate sponsors. Financial supporters play no role in the Tribune’s journalism. Find a complete list of them here.

This article originally appeared in The Texas Tribune at https://www.texastribune.org/2018/03/16/texas-ken-paxton-illegal-electioneering-school-districts/.