The Texas Commission on Public School Finance working group on expenditures met Wednesday morning to listen to a final round of witnesses invited to discuss issues related to school spending.

At the beginning of the meeting, group leader state Rep. Dan Huberty (R-Houston) announced plans to solicit formal recommendations from all witnesses who’ve testified before the working group. The group’s five members will meet again July 11, the day after a scheduled July 10 meeting of the full commission, and vote on which recommendations to endorse. 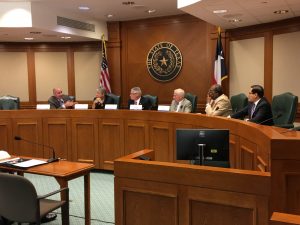 Texas Education Agency (TEA) staff opened Wednesday’s testimony with a review of the instructional materials allotment (IMA), and members of the group expressed interest in increasing the flexibility of IMA funds. State Rep. Diego Bernal (D-San Antonio) suggested consulting teachers as to how much physical textbooks are currently used in the classroom, and hypothesized that use is declining. Members seemed to unanimously support the idea of encouraging more reliance on technology and cheaper or free online resources, while freeing up IMA funds for other purposes.

Members also expressed frustration with textbook makers over the ongoing costs of keeping physical textbooks, while many educators are supplementing their instruction with materials found online at no charge. State Sen. Royce West (D-Dallas) suggested instructing TEA and the Texas Higher Education Coordinating Board (THECB) to develop a working relationship and establish a timetable wherein the legislature mandates universities to develop open-source materials aligned to the Texas Essential Knowledge and Skills (TEKS), which school districts would be required to use for classroom instruction. Sen. West contended this would address both textbook costs and complaints by higher education institutions that Texas high school graduates are not college-ready.

The discussion then turned to bilingual education and dual language. Witnesses testified that dual language programs are more effective than traditional English as a second language programs, but carry higher start-up costs. This includes textbooks in both English and Spanish, for example. Rep. Huberty noted that costs would necessarily be compounded with each additional language, such as programs for students who speak Vietnamese. West and Bernal expressed interest in legislation ordering a study of the costs of implementing more dual language programs.

Members also heard about funding for gifted and talented (GT) and career and technical education (CTE) programs. Each carries additional costs, but achieves important outcomes. The working group also heard from TEA staff regarding the high school allotment, and discussed the idea of folding the high school allotment into the basic allotment. This was a component of House Bill 21, the school finance reform bill authored by House leadership during the regular session of the 85th Texas Legislature.

Finally, a representative with out-of-state education reform think tank EdBuild suggested improving equity by decoupling school funding from average daily attendance (ADA) and instead using the number of students for whom a school is responsible. Rep. Huberty noted that ADA provides an incentive for districts to ensure that students are actually in the classroom. The EdBuild representative also suggested that by allocating some adjustments at the district level instead of per student, Texas’s school finance system creates unnecessary conflict and confusion between how charter schools and traditional ISDs are funded.