Both before and after the horrific school shooting in Santa Fe, we’ve been glad to see state leaders and school district officials recognize that student mental health efforts must be included in their work on safe and supportive schools.

New CDC data on suicide attempts among Texas high school students underscore how urgent these efforts are, how widespread mental health challenges are in Texas schools, and that mental health strategies must reach all students on campus.

Twelve percent of Texas high school students attempted suicide in 2017 according to disturbing new data released by the Centers for Disease Control and Prevention (CDC). The 2017 Texas youth suicide rate was substantially higher than the national average of seven percent and higher than the previously reported Texas rate of 10 percent in 2013. 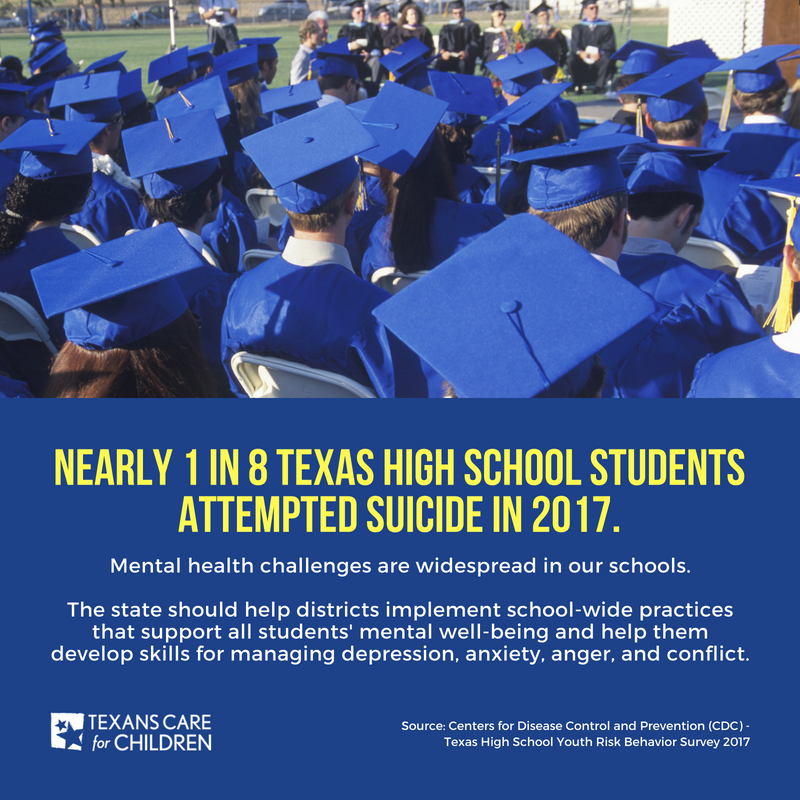 While kids from all backgrounds are at risk, the data show that certain youth have a particularly high risk. Among Texas high school students, 19 percent of black kids and a shocking 44 percent of gay or lesbian kids attempted suicide in 2017.

The report includes a number of other data points on teen health and behavior. It shows an increase in the already-high number of Texas high schoolers who reported feeling sad or hopeless: 34 percent in 2017 compared to 28 percent in 2013. It also shows that many Texas high school students — around 19 percent — reported that they were bullied on campus, similar to the number reported in 2013.

The pain and despair behind these numbers is heartbreaking, but it should also be a call to action. We all need to work harder to understand and address the causes of this crisis. We also need our policymakers to strength our children’s mental health policies, including policies to support students through our schools.

Schools – with state support – should offer mental health professionals and implement campus-wide strategies for all students.

We encourage more Texas school districts to implement school-wide practices that support all students’ mental well-being and help them develop skills for managing feelings of sadness, stress, anger, and conflict. If students are struggling with depression or anxiety, schools can provide or help connect students and their families to mental health services they need to be safe, healthy, and engaged in school. We are pleased to see that a number of school districts are already implementing these strategies.

The Legislature should help more school districts take action. Just as the Legislature established a Texas School Safety Center to help districts handle security issues, it should establish a center that focuses on positive school climates and school-based prevention and intervention strategies to reduce the likelihood that students will face barriers to their learning and health, like mental health concerns, substance use, challenging behavior, and violence. The Center would give districts and the state a trusted place to turn for training and technical assistance on practices shown to create safe and supportive school climates. The Legislature should also provide funding for mental health professionals, such as counselors and social workers, as Governor Abbott suggested.

We look forward to working with educators, district officials, legislators, parents, and other Texans on this critical issue.

Texans Care for Children is a statewide, non-profit, non-partisan, multi-issue children’s policy organization that seeks to drive policy change to improve the lives of Texas children today for a stronger Texas tomorrow.