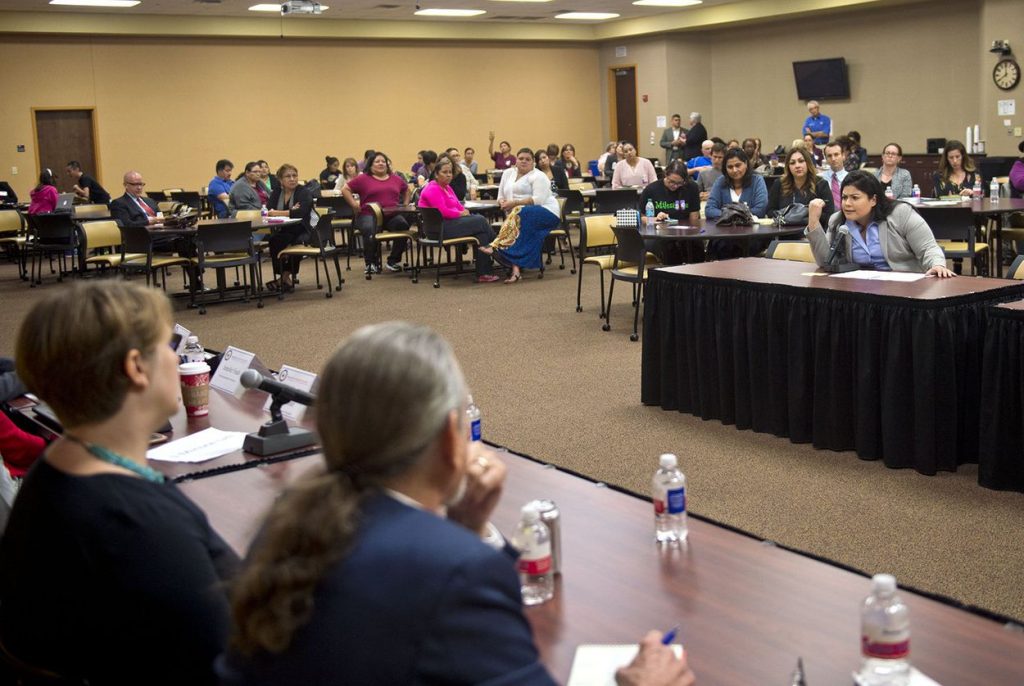 Vanessa Tijerina addresses the panel about her 13-year-old special needs child who has been denied special education for 4 years on December 13, 2016. U.S. Department of Education officials held a meeting in Edinburg on their tour of Texas to hear community members' experiences with special education, continuing an investigation of whether Texas is capping services for students with disabilities. Photo by Eddie Seal/The Texas Tribune.

A U.S. Department of Education investigation concluded Thursday that Texas violated federal law by failing to ensure students with disabilities were properly evaluated and provided with an adequate public education.

After interviews and monitoring visits with parents, school administrators and state officials, the federal investigation found that the Texas Education Agency effectively capped the statewide percentage of students who could receive special education services and incentivized some school districts to deny services to eligible students.

It also told TEA that it needs to take several corrective actions, including producing documentation that the state is properly monitoring school districts’ evaluations for special education, developing a plan and timeline for TEA to ensure that each school district will evaluate students previously denied needed services and creating a plan and timeline for TEA to provide guidance to educators on how to identify and educate students with disabilities.

“Far too many students in Texas had been precluded from receiving supports and services under [the Individuals with Disabilities Education Act],” said U.S. Secretary of Education Betsy DeVos in a statement Thursday. “I’ve worked directly with TEA Commissioner [Mike] Morath on resolving these issues, and I appreciate the Texas Education Agency’s efforts to ensure all children with disabilities are appropriately identified, evaluated and served under IDEA.

“While there is still more work to be done, leaders in the state have assured me they are committed to ensuring all students with disabilities can achieve their full potential.”

In response to the report, Gov. Greg Abbott sent a letter to Morath demanding that TEA prepare an initial plan to reform special education within the next seven days, with the input of parents, advocates and educators. He also demanded TEA develop legislative recommendations to help ensure districts comply with federal and state special education laws.

Legislators passed a law in May prohibiting Texas from capping special education services. Special education advocates and parents had lobbied for a number of smaller reform bills during the session, few of which passed.

“Federal officials have provided no definitive timeline for action by TEA, but parents and students across our state cannot continue waiting for change,” Abbott wrote. “I am directing you to take immediate steps to prepare an initial corrective action plan draft within the next seven days.”

In a statement Thursday, Morath said he will continue to increase training and support for educators on educating students with disabilities.

“We have added significant resources focused on increasing technical assistance and training for our school systems, including 39 statewide special education support staff in the last year,” he said. “I am committing today that there will be more.”

The federal investigation was prompted by a series of reports from the Houston Chronicle alleging TEA had denied needed special education services to thousands of students with disabilities across the state. Texas provides special education to a small percentage of students compared to other states. That number has gone up from 8.5 percent in 2015-16 to 8.8 percent last school year, according to TEA’s statewide academic performance report.

TEA has denied all allegations that it capped services for students.

The report comes more than a year after federal officials traveled to five Texas cities in December 2016 and heard parents tell numerous stories about educators who had not been properly trained on what services they were legally required to provide students with disabilities. The agency also collected more than 400 public written comments from those who could not attend a meeting in person.

The report Thursday confirmed the complaints of many the parents who spoke out at those meetings. It said:

The agency’s attempts to address some of these problems in the last several months collapsed recently after it awarded a contract to overhaul special education to a company with a short track record without letting other firms bid for the job. After parents of students with disabilities argued the contract was poorly thought out, Morath terminated it — with $2.2 million in federal funding already spent for services rendered. The agency is now conducting an internal review of its contracting processes.

This article originally appeared in The Texas Tribune at https://www.texastribune.org/2018/01/11/federal-special-education-monitoring-report/.