Early voting is underway NOW for the March 6 Texas primary elections, so we’re taking a look at some of the reasons why it’s so important that educators vote in this election! Today, we’re taking a closer look at your retirement.

Everyone who decides to become an educator enters into a special agreement with the State of Texas. It goes something like this: If you devote your life to preparing our children for the future, Texas promises to be there for you when you retire at the end of a long career of service.

Only that promise is constantly under attack.

Let’s start with some basics. Your retirement is administered by the Teacher Retirement System of Texas (TRS), which oversees the pension trust fund. The state and individual educators each contribute to the fund, and a team of professional staff supervise a diverse investment portfolio that makes up the body of the fund. These full-time agency employees ensure the fund’s health and safety. After paying for the cost of administration and benefits, the money from those investments is plowed right back into the fund.

TRS is structured as a “defined benefit” retirement plan, which means that an individual who pays into the plan is guaranteed a set amount of money each month in retirement that will last for the rest of his or her life. The more common type of retirement plan is a “defined contribution” plan, such as a 401(k). Unlike the promise of a stable monthly pension check upon retirement offered by a defined benefit plan, a defined contribution plan promises merely a set contribution into an employee’s retirement account while the individual is actively working. Investment returns on that account are subject to the whims of the market. The level of retirement that can be provided by those funds at the end of an educator’s career is not guaranteed. Under a defined contribution scenario, there is a real threat that a retired educator may outlive the retirement funds accumulated during his or her career, and end up with nowhere to turn for help — not even Social Security.

You may have noticed that most businesses in the private sector have gone the defined contribution route. The reason is largely because 401(k) plans are cheaper and don’t require dedicated staff to administer. Most are run for a profit by large Wall Street corporations, and advisers often have a financial stake in the investments they recommend. This leaves plenty of opportunities for others to make money, but little guarantee of stable retirement income for the retiree. The defined benefit plan administered by TRS is, by contrast, of great value to retirees, who can rest easier knowing that they will receive a guaranteed income for as long as they are alive.

As with most big pots of public money, the TRS pension fund has unfortunately become the focus of those looking to brag about shrinking government while making a few bucks for their friends.

In 2017, the Texas Senate confirmed Josh McGee as chairman of the Texas Pension Review Board (PRB), which oversees state pension systems including TRS. Prior to being appointed to that position by Gov. Greg Abbott, McGee worked as a professional advocate for converting public pensions to defined contribution plans that would reduce the money guaranteed to retirees, and his position at the helm of PRB naturally raised alarm bells.

Adding to the concern, lawmakers have filed a number of bills in 2017 and in prior legislative sessions that would likewise weaken TRS. State Sen. Paul Bettencourt (R-Houston) – who made headlines recently with his objections to efforts to improve voter turnout among educators – filed a pair of bills last year aimed at converting TRS from a defined benefit plan to a defined contribution plan or a hybrid of the two. Both bills died without a hearing, fortunately, but Lt. Gov. Dan Patrick is keeping the idea alive as part of his interim charges for the Texas Senate to study before the legislature reconvenes in 2019.

Most troubling is recent news from the TRS Board of Trustees that it intends to vote to lower the assumed rate of return for the $147 billion pension fund from 8.0 percent down to 7.25 percent. The decision was based on observations of current market forces, and while fiscally prudent, it radically changes the plan’s outlook on paper. Like all pension plans, the TRS fund must be considered solvent before the legislature or board can consider any potential increases in benefits. With the lower assumed rate of return, TRS will head into the 2019 legislative session needing an additional $1.5 billion for future solvency, and they’ll be asking for that money from lawmakers who frequently are looking to cut spending, not increase it. 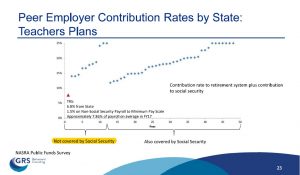 Politicians like Sen. Bettencourt frame their attacks on educators’ pensions by claiming the defined benefit structure is too expensive for the state to maintain into the future. In fact, the state’s share of an educator’s pension (at 6.8 percent) is less than half the teacher retirement contribution rate set by the next lowest state that is not paying into Social Security. The truth is that a more conservative assumed rate of return, coupled with a proper contribution rate, will guarantee TRS stays healthy well into the future.

The bottom line: Like public education as a whole, Texas gets a phenomenal bargain for what it spends, but more funding is necessary to fully realize the implicit promise made to educators.

Lawmakers will face tremendous pressure in 2019 from investors and politicians who want to gamble with teachers’ retirement. Unless Texans elect more pro-public education lawmakers and statewide elected officials, the legislature may very well look to your pension as an area to further cut corners. Texas will only keep its promise to educators if lawmakers respect educators’ voices at the polls in this pivotal election year.

Go to the CANDIDATES section of our Teach the Vote website to find out where officeholders and candidates in your area stand on educators’ retirement and other public education issues. Because voting districts in Texas are politically gerrymandered, most elections are decided in the party primary instead of the November general election. That’s why it is so important to vote in the primary election taking place now. Registered voters can cast their ballot in either the Republican or Democratic primary, regardless of how you voted last time.

Early voting in the 2018 primaries runs Tuesday, Feb. 20, through Friday, March 2. Election day is March 6, but there’s no reason to wait. Get out there and use your educator voice by casting your vote TODAY!