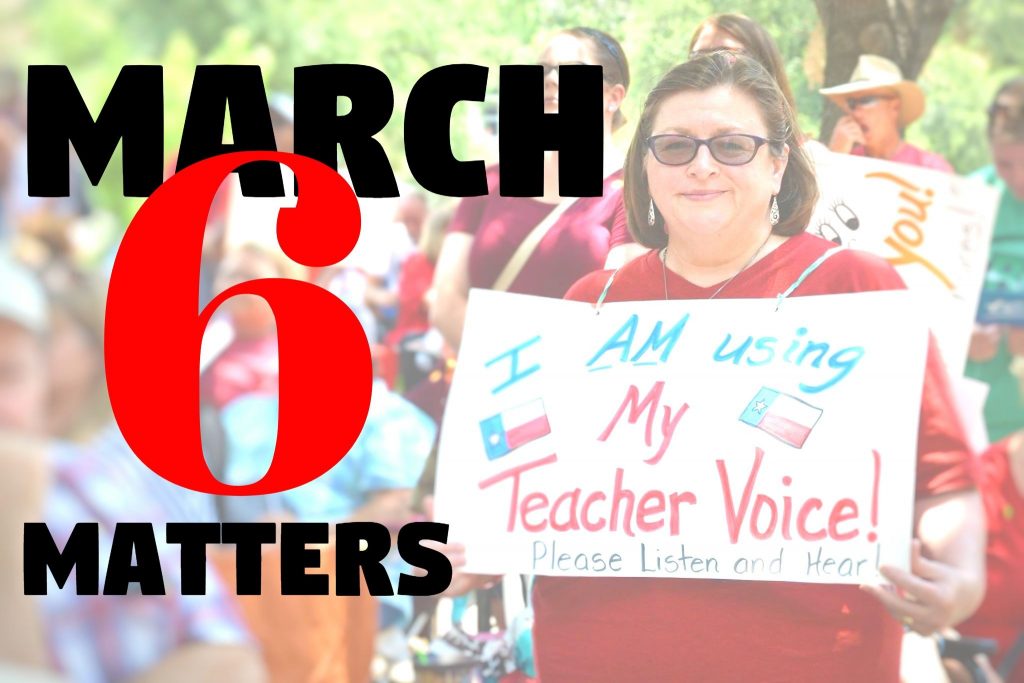 Early voting is underway NOW for the March 6 Texas primary elections, so we’re taking a look at some of the reasons why it’s so important that educators vote in this election! Today, we're taking a closer look at healthcare for active and retired educators.

In our first post of this series we examined teacher pay, which lags behind the national average. While paychecks are a major concern, Texas also spends less than any other state on employee benefits, funding them only at about $967 per pupil, which includes the cost of health insurance. In fact, Texas spends less than our neighboring states Oklahoma and New Mexico, which are both under the national average as well but are spending $1,505 and $1,905 per pupil respectively, despite having significantly less wealth per capita than Texas (U.S. Census Bureau, Public Education Finances: 2014, G14-ASPEF, released May 2016).

The ever-increasing amount of money being taken out of educators’ paychecks for healthcare is primarily due to the fact that state funding and state-mandated district funding for health insurance, including the TRS-ActiveCare plan used by many districts for their employees, has remained unchanged since the program first began some 17 years ago.

When the Legislature first decided to subsidize teacher health insurance premiums back in 2001, the $225 contribution for each employee (made up of $75 from the state and $150 from the school district) was in line with what private employers were paying toward healthcare for their employees. Since that time, health insurance inflation generally has been between eight and ten percent per year, and educator premiums have increased more than 250 percent. Also during that time frame, many private employers have increased what they pay toward employee health insurance premiums, but Texas’s funding of the healthcare program for public school employees has fallen way behind.

Legislative inaction has now led to an insurance program for school district employees that is more burdensome than beneficial, and for many educators, it amounts to a pay cut year after year. Back In November 2014, the Teacher Retirement System (TRS) released its TRS-Care Sustainability and TRS-ActiveCare Affordability Study that was commissioned by the 83rd legislature. It outlined numerous options for lawmakers to consider in dealing with the looming healthcare crisis for educators. Despite those recommendations, the legislature has failed to address exploding healthcare costs for active employees.

One reason the legislature has neglected to address healthcare costs for active employees, including during the most recent 2017 legislative sessions, is the sad fact that the state’s health insurance program for retired educators, TRS-Care, is in even worse shape. After years of inadequately funding retirees’ health insurance, the legislature has now faced back-to-back sessions in which the program was at risk of running out of money and collapsing in on itself —a prospect that would leave hundreds of thousands of retired educators with no health insurance, dramatically limiting their access to healthcare when they most need it.

Back in 2015, the 84th Texas legislature opted not to address the funding formulas that determine how our state pays for TRS-Care. Instead, they made a $700 million supplemental appropriation to keep TRS-Care afloat for one more budget cycle.

By the time the 85th legislature arrived in Austin in January 2017, the TRS-Care shortfall had ballooned to $1.2 billion. Again, lawmakers were unwilling to address the underlying funding formulas, and they similarly declined to make even a one-time appropriation to cover the full cost. Instead, the Senate under the guidance of Lt. Gov. Dan Patrick and Sen. Joan Huffman, who chaired the Senate Committee on State Affairs that oversees TRS, pushed forward a plan that cut the cost of TRS-Care to the state by shifting more costs to retirees.

It’s worth nothing that retired educators have not seen a cost of living adjustment to increase their pensions for over a decade, during which time they’ve also had to endure dramatic reductions in their healthcare benefits as a result of restructuring of the health insurance plan. That combination of dwindling purchasing power due to the effects of inflation on stagnant pension payments and crushing new healthcare costs caused such an outcry from retired educators that by the time legislators came back to Austin in the summer of 2017 for a special session, they felt compelled to put a modest amount of one-time extra dollars into the system to temporarily soften the blow of the impending changes to TRS-Care. However, those additional one-time funds were only a short-term band-aid on a much larger problem that remains.

Even with the draconian measures taken by the 85th legislature, resulting in significant rate hikes for many plan participants, TRS-Care is projected still to have a funding shortfall that will have to be addressed by the 86th legislature. In other words, lawmakers must act in 2019 if TRS-Care is to continue to exist for retired educators.

Finding real solutions to the crisis of access to affordable healthcare for the state’s active and retired educators is a complex and expensive task. It cannot and will not be achieved by legislators whose singular priority is creating the appearance of cutting state spending without solving the problems faced by our state’s more than 1 million active and retired school employees. The elections that will determine who occupies those critical legislative seats and will have the power to decide the future of healthcare funding for educators are happening right now. Active and retired public school employees who have dedicated their lives to serving and educating our 5.4 million young Texans have the power to shape the outcome of this battle simply by voting in the 2018 primaries.

Go to the CANDIDATES section of our Teach the Vote website to find out where officeholders and candidates in your area stand on school finance and other public education issues. Because voting districts in Texas are politically gerrymandered, most elections are decided in the party primary instead of the November general election. That’s why it is so important to vote in the primary election. Registered voters can cast their ballot in either the Republican or Democratic primary, regardless of how you voted last time.

Remind your colleagues also about the importance of voting in the primary and making informed choices at the polls. Keep in mind that it is illegal to use school district resources to communicate information that supports or opposes specific candidates or ballot measures, but there is no prohibition on sharing nonpartisan resources and general “get out of the vote” reminders about the election.

Early voting in the 2018 primaries runs Tuesday, Feb. 20, through Friday, March 2. Election day is March 6, but there’s no reason to wait. Get out there and use your educator voice by casting your vote TODAY!