I was listening to a retired educator testify before the TRS board at their annual board retreat this morning. She expressed that retirees are scared about increasing healthcare premiums and upcoming changes that will greatly impact the actuarial picture of the pension fund. She also asked for TRS to advocate on behalf of retirees in dealing with the legislature. It was moving testimony. However, I wish she and all educators, active and retired, would shift their mentality from scared to angry and look not to TRS to take care of them next session, but instead look to themselves to be their own best advocates, at the polls where these decisions are really made.

The reality is TRS is an administrative agency, and while the TRS staff does a phenomenal job, their job is to implement the legislature’s will, NOT to lobby the legislature on behalf of TRS members. In fact, all state agency staff, TRS staff included, are prohibited by state law from engaging in lobbying efforts.

TRS has hard days ahead. If the defined benefit pension system or TRS-provided retiree healthcare are going to continue to exist, active teachers and retired teachers alike will have to use their voices not only at the capitol but also at the polls.

What are the factors that underpin this bleak reality?

First, TRS is set to drop its assumed rate of return from 8 percent to 7.25 percent. This one action, at least on paper, will make the fund go from healthy to anything but. There is already extreme pressure from Wall Street money managers and the politicians willing to work on their behalf to convert TRS to a 401(k) style system off of which they could make huge profits. Without other changes offsetting the drop to 7.25, this pressure will likely increase exponentially as the pension fund will look considerably more vulnerable going forward.

Second, despite the draconian changes to TRS-Care coming out of the last legislature, the retiree health insurance system, as it stands today, still is not financial sustainable. And the issues with retiree health care don’t even take into account the significant health insurance burden on active teachers, which is forcing many of them out of the education profession.

Sometimes there are smart policy initiatives that can solve statewide challenges with little or only indirect additional costs. The challenges facing TRS are NOT those kinds of challenges. The truth is that the state has for years gotten by knowingly underfunding both the pension trust fund and the retiree healthcare trust fund. On the pension side, in fact, the state’s share of an educator’s pension (at 6.8 percent) is less than half the teacher retirement system contribution rate set by the next lowest state not paying into Social Security. 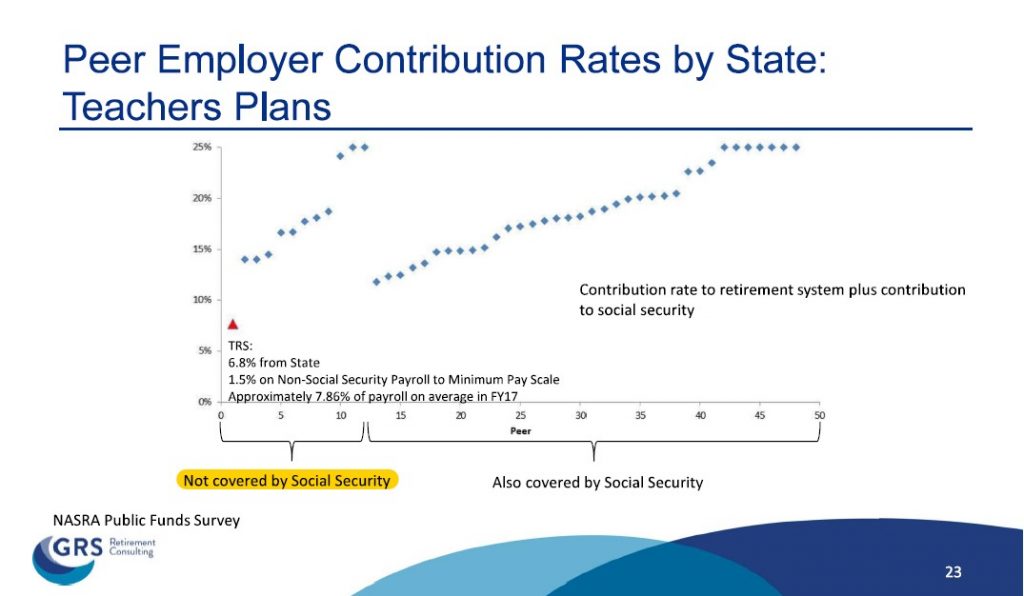 Texas has now reached a point where getting by on barebones funding can no longer happen – not if we want to continue providing teachers with a pension or retiree health insurance. What has changed?

As stated above, in response to long term market trends and despite best-in-class fund management by TRS staff, the agency is expected to reduce the assumed rate of return on the fund to 7.25 percent, down from 8 percent. This change will increase the pension’s unfunded liability by $10 billion and raise its funding period from just over 30 years to a whopping 86 years. (Anything under a 30-year funding period is considered actuarially sound, and for TRS the 30-year period has been linked to providing cost of living increases (COLAs) for retirees.) At 8 percent there was an expectation that the fund would be in a position to offer a COLA within the next few years, at 7.25 percent the fund would not be considered healthy enough to offer retirees a COLA for at least the next 56 years.

In order to offset the adjustment to the assumed rate of return, the TRS pension fund’s contribution rate will need to be increased enough to generate an additional $1.4 to 1.6 billion per biennium.

TRS must be honest and stay above political bias or pressure in setting its estimated rate of return. In truth, a lower assumed rate of return, as long as it is coupled with a proper contribution rate, will produce a healthier pension system in the long run. However, because it is up to the legislature and not TRS to adjust the contribution rate, it is vital that the agency be diligent and expedient in communicating to its members the realities and potential consequences of a decision to adjust the fund’s assumed rate of return.

In addition to needing $1.5 billion or more in new pension contributions, TRS will also need substantial additional dollars just to sustain TRS-Care at the new 2018 levels. In all, TRS estimates that it will be asking the legislature to appropriate between 2 and 2.5 billion additional dollars next biennium. Lobbyists for each of the four statewide educators groups (including ATPE), the retired educators group, and a group representing school districts, when given the opportunity to comment, expressed their belief that such an ask would be a complete non-starter with the current group of legislators, particularly the Governor, Lt Governor, and the majority of Texas Senate.

Without substantial additional funds; TRS-Care will quickly go bankrupt and cease to exist. Active teachers’ health insurance costs will continue to rise unchecked pushing more and more good teachers out of the profession, and the TRS pension fund will be on a certain path toward being abolished. That is the very likely future, unless retired and active educators alike decide to make their voices heard at the polls this election year. Early voting starts Tuesday, Feb 20, and runs through Friday, March 2. Election day is Tuesday, March 6. With over one million active and retired education professionals in the state of Texas, the question is not whether you can save your retirement, fix your health insurance, and improve public education policy for 5.4 million students in this state. No, the only question is – will you?