The Texas Commission on Public School Finance met for the second time Thursday in Austin, and began by voting State Board of Education (SBOE) Member Keven Ellis (R-Lufkin) as vice-chairman. Justice Scott Brister, the commission chairman, outlined the working groups and expressed his intention to announce assignments by the next meeting. 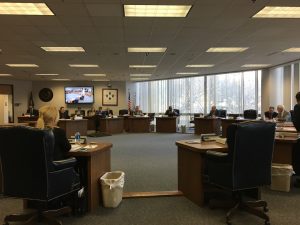 Justice Brister announced upcoming meetings of the commission will be held February 22 and March 7. Members of the public will be able to testify before the commission at a meeting to be held March 19. These meetings will focus on successful programs across the state that are improving student results, payment for teachers, teacher recruiting and retention, and closing the gaps between demographic and income groups, among other things.

Brister invited members of the public to submit comments regarding the commission to schoolfinancecommission@tea.texas.gov. Sen. Royce West (D-Dallas) recommended the board consider the public use of tax dollars for charter schools, and whether there is an oversaturation of charters in areas where traditional public schools are already doing a good job.

Texas Education Agency (TEA) Commissioner Mike Morath opened the day’s testimony with a presentation casting skepticism on the correlation between per-student funding and student performance from district to district. Morath nonetheless acknowledged that money does matter, and the picture could look very different from campus to campus within a district. Sen. West voiced interest in seeing the correlation between funding and performance and the campus level. House Public Education Committee Vice-chair Diego Bernal (D-San Antonio) pointed out that comparisons using all dollars does not track how much spending actually makes it to the classroom.

Todd Williams, the education advisor for Dallas Mayor Mike Rawlings, pointed out that more than half of Texas students are classified as economically disadvantaged, and emphasized that finding a way to improve the performance of economically disadvantaged students is the single most impactful means of improving student performance as a whole. Austin ISD Chief Financial Officer Nicole Conley Johnson noted that larger districts, which educate majority of Texas students, have a variety of unique funding needs, and countered that increasing funding would in fact have an impact on student outcomes.

Thursday’s agenda featured a panel of witnesses to discuss school finance trends. First up was TEA Chief School Finance Officer Leo Lopez, who summarized the key revenue inputs to the school finance formula. These include the basic allotment, which comes from the Permanent School Fund (PSF), as well as local property taxes for maintenance and operations (M&O) and interest and sinking (I&S). Most revenue growth has come from local property tax collections, which have increase as a result of rising property values. Conley Johnson suggested that efforts should be made to make local taxpayers more aware of the impact recapture payments have on their contributions to local school funding.

State Sen. Paul Bettencourt (R-Houston), a persistent advocate for private school vouchers, stated his intent that with regard to the commission’s exploration of school finance factors, “What gets measured, gets fixed.” Sen. Bettencourt made multiple requests for data excluding I&S funding, which is used to service bonds used for the construction of new facilities as districts grow. Those who argue public schools already receive either enough or too much funding have recently begun to argue that I&S funding should not be included in data that show state funding for public schools has steadily decreased over time. The state’s share of public school funding has fallen from around fifty percent to just 38 percent of the total burden. The education budget approved by the 85th Texas Legislature spent around $2 billion less in state funds – choosing to shift that money onto local taxpayers as a result of rising property values.

Mathew Chingos, director of the Urban Institute’s Education Policy Program, compared Texas scores on the National Assessment of Educational Progress (NAEP) test to those of other states, and found that Texas performs relatively well in reading and math. According to Urban Institute’s analysis, Texas continues to lag average nationwide per-pupil spending, and poor students tend to receive $730 less local funding on average than non-poor students. That gap is narrowed when state and federal funding is incorporated. Chingos testified that district property wealth isn’t always indicative of student need, and median household income doesn’t necessarily correlate with per-student property wealth. He also pointed out district-level funding is not school-level funding, and districts may distribute resources in ways that either reinforce or counter state priorities. Chingos testified that research has shown that while it may not be the top driver, money does correlate with improved outcomes, and scatter charts previously used to question that correlation are somewhat problematic due to the complexity of school finance formulas.

Zahava Stadler, manager of policy and research for EdBuild, testified that Texas relies primarily on a student-based funding formula, but in a way that doesn’t fully realize the advantages of student-based funding. For example, Texas’ labyrinthine funding formulas don’t prove a simple and transparent expectation of funding for a given student. Morever, the local funding responsibility is not based upon clearly defined and uniform factors. Texas adjusts for economically disadvantaged students who are eligible for free or reduced-price lunch by funding them at an additional 20 percent for compensatory education services. According to EdBuild, parallel weights in other states range from five percent to 97 percent. Similarly, Texas funds English language learners (ELLs) at an additional ten percent, while parallel weights in other states range from 20 to 60 percent. The vast majority of Texas students fall into one or both of these categories.

Representing the Education Commission of the States, Michael Griffith and Emily Parker recommended align the school funding system to desired student outcomes. The system should be reviewed periodically to ensure it is aligned with student achievement goals. Lori Taylor from the Mosbacher Institute at Texas A&M University concluded the day’s testimony. Professor Taylor suggested cost estimates for educating economically disadvantaged students are so varied at least in part because student poverty is not well measured or uniformly defined. The kind of poverty felt by students in Houston may be very different from the kind of poverty felt by students in rural Texas. Cost estimates for ELLs are likewise varied due to factors such as age, native language and home environment. Taylor concluded that teacher quality is more impactful than class size when allocating spending, and districts could achieve higher performance with current levels of funding by replicating the best practices of high performing peers.

Responding to a question from Member Ellis, Professor Taylor suggested that the current Cost of Education Index (CEI) multiplier could be updated to within a range of 30 and 40 percent. The CEI is a core component of the current school finance system, but hasn’t been updated in decades.