Following the money in Texas politics: A citizen's look at the influence of mega-donors in contested elections

There is a saying that a fish rots from the head down. In Texas politics, there has certainly been something rotten going on, but I wasn’t quite sure where the smell was coming from until Jan. 11, 2018.

I’m not a political wonk by any means, but I try and pay attention; and when I see something that I think impacts my community, I say something. I’ve had concerns with my current state representative, Rep. Mike Lang. It seems to me that the things he has supported while in office don’t line up with the interests of the bulk of his constituents in House District 60. When I looked at Lang’s campaign donations received since announcing his run for the office in March 2015, I was floored. Sixty-five percent of all his donations had come from one family, the Wilkses, who are billionaires from Cisco, Texas. The Wilks family members have very specific views and have advocated strongly for private schools and vouchers. They have given a lot of money to different political candidates, with Rep. Lang looking like the biggest recipient. Not surprisingly, Lang has acted and voted like a representative who has been bought and paid for by a big donor. If you look at the Wilkses’ goals for Texas, that is how Rep. Lang votes, every time.

I will not hide the fact that I’m a supporter of Dr. Jim Largent, who is challenging Rep. Lang in the 2018 Republican primary race for HD 60. But, I have been surprised at how Empower Texans and the Hood County Republican Party have attacked Dr. Largent after he announced his candidacy. Why would they attack someone who is so well respected in the community? I understand not agreeing with every aspect of a candidate’s positions, but this has been something different. My interest piqued, I decided to look at Empower Texans the same way I looked at Lang. I knew Empower Texans had been widely regarded as a vehicle for another billionaire, Tim Dunn, and I figured that’s what I would find in my research. I was wrong. 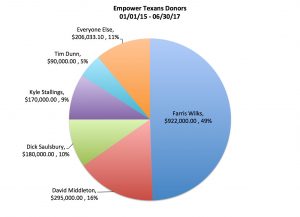 Pulling the campaign finance reports from the Texas Ethics Commission from the period of Jan 1, 2015, through June 30, 2017, you have a really solid look at the Empower Texans PAC from the beginning of the 2016 election cycle and the beginnings of the 2018 election cycle. I found that the Empower Texans PAC has received $1,863,033.10 in total donations, broken down as follows:

The guy I thought was calling all the shots for Empower Texans, its chairman Tim Dunn, appears to have been relegated to being a minor player. The Wilks family and a few other big money followers are the drivers of Empower Texans, which portrays itself as a grassroots, “for the little guy in Texas” organization. I believe that people like the Wilkses typically give such large sums of money for a few reasons: To buy the necessary influence to impose their beliefs onto others, to make even more money, or both. Empower Texans’s propaganda, which is all any of their communications are about, is designed to sow fear and discord, and to convince people there are things in their community to be feared and mistrusted. The group promotes fear of things like public schools spreading a “liberal” agenda, local government, and teachers voting. They aren’t really about “empowering Texans” —the people like you, me, and those in our communities—at all. They are in it for themselves. 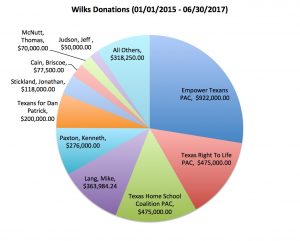 Let’s be clear about campaign finance. The Wilks family is giving a lot of money. Is it illegal? Nope. If it’s their money, can’t they spend it as they see fit? Yes.

The Wilkses have enough money to buy attention, and they are. They are pouring immense amounts of money into the political process to convince politicians, communities —almost the whole state —that their beliefs are the beliefs of the majority, and things that are different are to be feared. If the Wilkses were just doing it in their own name, that would be one thing, but they are instead creating confusion by funding and attributing their message to multiple sources. When people hear ominous messages from multiple sources, citizens start to think, “Wow, there are so many people who believe this. What I believe must have no chance, so voting seems like a waste of my time.” What voters in Texas don’t realize is that all those sources are being directed by the same family. So what feels like lots of voices telling you something, making you believe there is broad support is just a few people behind a curtain. It becomes propaganda.

The PACs and their Orbits

Digging through the campaign finance data, I realized that Empower Texans wasn’t the only PAC getting money from the Wilkses. From Jan. 1, 2015, through June 30, 2017, the Wilks family looks to have given $3,345,734 for political causes, which does not include the $15 million they gave to a Ted Cruz for President PAC. There are three PACs getting a large portion of those dollars:

When I went and pulled the campaign finance reports on these PACs from the Texas Ethics Commission website, lo and behold, here were the same names that had been funding Empower Texans. What I have figured out also is that a handful of other big dollar families seem to run in the same “orbit” as the Wilkses. If the Wilks family gives to a cause or a candidate, the others seem to do the same. Granted, there is a candidate or a PAC here or there that doesn’t seem to have everyone pile on, but there is certainly a pattern among these families:

What makes it challenging to find the totals here is that these folks make donations to campaigns and PACs and things get recorded differently. Say one donation is from the husband, the next is captured as the husband and wife, a third is captured with the middle name, etc., which means when these donations roll up, they may be credited as being from a “different” person. I’m not saying it’s intentional, but it makes it very hard to follow the trail of breadcrumbs. 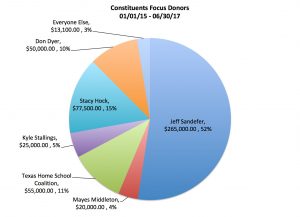 The last PAC I will call out is called the Constituents Focus PAC. This one is interesting, in part because $55,000 of its donations came from the Texas Home School Coalition PAC. Yes, that’s the same one that I just detailed above.

If you look at every one of these PACs, they aren’t dominated by the little guy chipping in a few bucks every paycheck to have his voice heard. It’s a few big money donors buying influence and setting themselves up to make more money, which gives them the ability to gain even more influence and money. It’s a vicious cycle. It only gets broken when voters wake up and decide they are going to vote in what is actually their own best interest, not in what some big money PAC or billionaire tells them is good for them.

Let me reiterate one more time. When you hear ANYTHING from one of these PACs, remember it’s five rich families and one extremely rich family telling you what to do and what to think, not the grassroots organizations they pretend to be. 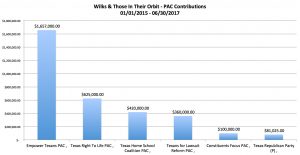 The Beneficiaries This group of families has invested HUGE dollars into a handful of political candidates. I’ve consolidated the contributions to those candidates from what I call the “Wilks & Their Orbit.” Here is the list of those candidates who have received more the $100,000 as of June 2017 from this small group of people and the PACs they fund:

For example, take HD 73 Rep. Kyle Biederman, who received 30 percent of his campaign contributions since 2015 from the Wilkses and their orbit. Seems like a lot of influence, but it there is still 70% of his campaign funding coming from elsewhere. Compare that to HD 128, where 44 percent of Rep. Briscoe Cain’s campaign contributions came from the Wilkses & their orbit. In HD 92, Rep. Jonathan Stickland has broken the 50 percent threshold, with 53 percent of his donations coming from this group of people.

Now let me finish my examples with the representative I started this piece on: Rep. Mike Lang, HD 60. He had 65 percent coming from just the Wilks family, but when you consider the orbit as well, Lang’s campaign funding from this group of donors jumps up to 76 percent!

The numbers speak for themselves. If anyone believes that a representative who is getting 30, 40, 50, 60, even 70 percent of his funds from one small group of millionaires / billionaires would ever make a move to upset those donors by voting against their interests, I’ve got a bridge to sell you.

Texans need to understand who is really being represented. Hint: It isn’t the little guy. The only way to beat this is to ignore the noise and vote for candidates who actually will represent you. Look at who is financing your candidate. Think about whether those funds are coming from inside your district. And then understand where and who your representative is really representing. One vote at a time, one election at a time, we can make a difference. 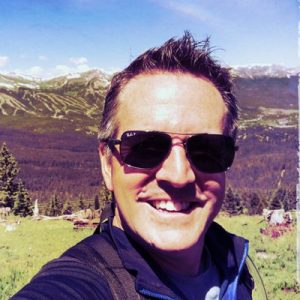 Christopher Tackett is a Granbury, Texas, parent and former trustee of the Granbury Independent School District who has been studying the relationship between money, influence, and Texas elections. You can learn about more of his findings at his website.