From the Texas Tribune: Here's how Texans can get involved in their party conventions

by Regina Mack and Sierra Juarez, The Texas Tribune
Feb. 7, 2018 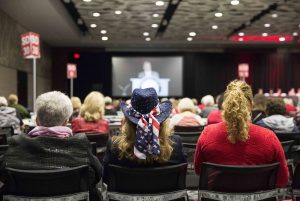 Attendees listen to speakers at the Texas Federation of Republican Women Convention in Dallas on Oct. 19, 2017. Photo by Laura Buckman for The Texas Tribune.

Hey, Texplainer: How do I join in on the action at the Republican, Democratic, and Libertarian party conventions? Essentially, how do I get hyper-involved?

Texas primary season is quickly approaching, which means some Texans are wondering how they can engage with state politics beyond just casting votes.

The March 6 primaries and state conventions are right around the corner, so it’s important to start getting involved in the process now.

WHAT HAPPENS AT A CONVENTION?

At each convention level, delegates are elected to move up the hierarchy and represent their party. To participate as a delegate in a convention, a person has to have voted in his or her party’s primary. Anyone can attend a convention without becoming a delegate, but delegates have more power to determine the course of their party. Among other tasks, the delegates shape party platforms, elect leadership and update party rules.

We talked to officials from the Democratic, Libertarian and Republican parties to help us explain how to navigate the convention system.

WHAT’S EACH PARTY’S PROCESS LIKE FOR GETTING INVOLVED IN CONVENTIONS?

Glen Maxey, a senior party adviser for the Texas Democratic Party, said getting involved in conventions is the best way to begin a political network, take advantage of volunteer opportunities and meet candidates and party officials. It’s also easy — all you have to do is vote, show up for the convention and fill out some forms. Here’s how it goes, according to Maxey:

Becoming a party delegate is a way to amplify voters’ voices, said Libertarian Party of Texas Chair John Wilford. Here’s how he suggests getting involved:

Going to a convention gives a regular voter a glimpse into the lives of legislators, Harris County Republican Party Chair Paul Simpson said. It’s a fun, active process that allows voters to help shape the platform of their party, he said. Simpson told us the best way to get involved in the Republican conventions:

In addition to conventions, getting involved in the local level is just as important, Simpson said.

“I’m a big believer in doing more than just going to conventions,” he said.

Members of all three parties can also volunteer for campaigns or join local party clubs. Visit Texas’ party websites and county chairs’ websites to find out more about how to get involved beyond the conventions.

This article originally appeared in The Texas Tribune at https://www.texastribune.org/2018/02/07/heres-how-texans-can-get-involved-their-party-conventions/.