Here's the latest update on education news and legislative developments from your ATPE Governmental Relations team: 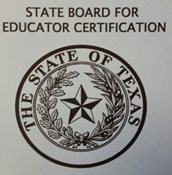 The State Board for Educator Certification (SBEC) met today in Austin. On the agenda was the approval of new teacher certification standards, performance standards for preparation program accreditation status, and principal and teacher surveys. The board gave final approval (subject to SBOE review) to the pedagogy and professional responsibilities (PPR) standards for the new Trade and Industrial Workforce Training Certificate and to updated performance standards under the accountability system for educator preparation programs (EPPs). The board also approved final versions of the previously piloted principal and teacher surveys to be used for EPP accountability. Minor changes were made to the surveys; a number of duplicative questions were removed to avoid data overlap.

The bulk of the meeting was spent on a discussion item regarding a proposal from the Texas Education Agency (TEA) to redesign the teacher certification process in Texas. The item was not up for action today, but still drew a large number of testifiers. The addition of a performance-based, portfolio-style certification assessment drew the most attention. Testifiers expressed concerns with cost, problems with the edTPA design, and fears of shrinking the teacher candidate pool, among others. Supporters raised the need for higher rigor in order to ensure teacher candidates receive adequate preparation, and they stressed that more than just a multiple choice certification exam should be required to demonstrate knowledge. The redesign item was only a discussion today, so no action was taken. For more on the discussion today, read this Twitter thread from ATPE Lobbyist Kate Kuhlmann.

With the regular session of the 86th Legislature only a month away now, school finance continues to dominate discussions about which education-related issues lawmakers will tackle earnestly in 2019. ATPE's lobbyists have been reporting on the deliberations this year of the Texas Commission on Public School Finance, which was tasked with making recommendations for legislative changes to the state's beleaguered school funding system. A final report is expected from the commission this month.

Many of those recent school finance discussions involving legislators and policymakers have centered around the desire to provide property tax relief for homeowners and cap the amount of local taxes that can be levied by school districts and other municipalities. Decreasing the taxing burden at the local school district level is a popular idea, along with requiring the state to assume responsibility for funding a larger portion of the state's education budget. But as Ross Ramsey writes in his analysis this week for the Texas Tribune that we've republished here on Teach the Vote, it remains unclear where additional revenue might be generated to offset the reduction in local property taxes. ATPE's lobby team will continue to participate in and report on the discussions about school finance as we head into the upcoming legislative session. 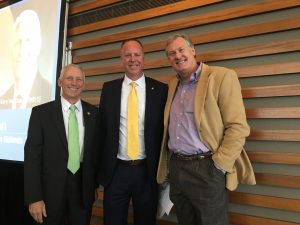 On the heels of a competitive 2018 election cycle, many elected officials have also been talking about raising teacher pay. This week, two state representatives debated the issue of teacher compensation during a conference hosted by the Texas Association of Midsize Schools. ATPE Executive Director Shannon Holmes was invited to moderate the panel discussion, and ATPE Lobbyist Mark Wiggins provided this blog post about the event.

Register to attend the 2019 ATPE at the Capitol event taking place in Austin on Feb. 24–-25, 2019! ATPE members, this is your opportunity to be a part of the process when the Texas Legislature convenes next month.

On Sunday, Feb. 24, you’ll learn about the top education issues that will be on the front burner next session and receive training on how to become an effective advocate for your profession. On Monday, Feb. 25, you’ll head to the Texas Capitol along with hundreds of ATPE members to directly speak to legislators and their staff.

To learn more about this exciting event, please log in to atpe.org/advocacy-central to register (there is no registration fee). The deadline to register online for this event and book hotel rooms is Jan. 24, 2019. Take advantage and register early as hotel rooms are booking up fast. Please feel free to contact government@atpe.org. with any questions.

Houstonians will be heading to the polls once more on Dec. 11 to determine who will represent them in the state senate during the upcoming legislative session. After Sen. Sylvia Garcia vacated her seat to run for Congressional District TX - 29, a seat she won last month, a Senate District 6 special election was called by Gov. Greg Abbott in order to fill her seat. The two women leading the race to replace Garcia are well known Houston Democrats Rep. Carol Alvarado of Texas House District 145 (HD 145), Rep. Ana Hernandez of Texas House District 143 (HD -143), Democrat Mia Mundy, and Republican Martha Fierro. If a single candidate fails to capture 50 percent of the vote on Tuesday, there could be a runoff in January after the legislative session has begun. Early voting in the race ends today. Harris County voters can find poll locations and sample ballots here.

Dec. 11 will also be election day for a number of local races across the state, so find out what's on your local ballot here.