The office of Texas Governor Greg Abbott issued a report today on school safety, specifically highlighting actions being taken by school districts to respond to growing concerns about violence in schools and related safety measures. The "School Safety Action Plan Summary" follows an earlier School and Firearm Safety Action Plan shared by the governor's office earlier this year. The governor also convened a group of stakeholders back in July to discuss the issue, and ATPE's state officers were invited to weigh in.

Among the safety measures noted in the governor's summary report out today are training programs for educators, including the Mental Health First Aid course that is available at no cost to public school employees through their local mental health authorities. The eight-hour course for which educators can earn CPE credit focuses on identifying the signs and symptoms of mental health and substance abuse problems in students. Educators can learn more about the program here.

The governor's report out today also highlights an increase in the number of school marshals, who are school employees trained and authorized to provide an armed response to violence incidents on a school campus. The school marshal program has existed since 2013 when the legislature passed House Bill 1009 by Rep. Jason Villalba, but relatively few school districts have opted into it. As ATPE Lobbyist Monty Exter noted in this article for the Dallas Morning News, "Whether it's due to a lack of knowledge of the programs available or a lack of will to implement them, school boards have clearly not made arming educators a priority." Money is also an ongoing issue in the debate over keeping schools safe, as school districts that are already facing deficiencies in their revenue struggle to find ample cash to pay for additional training, make building updates, or provide mental health resources. 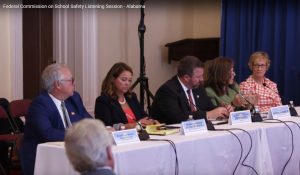 On Tuesday, Texas State Board of Education chair Donna Bahorich was a panelist in a listening session for the Federal Commission on School Safety. The event held in Montgomery, Alabama, was part of a series of listening sessions held around the country with the goal of devising strategies to improve school safety.

Bahorich talked about the mental health aspect of curbing violence in schools, including the need to remove the stigmas associated with seeking mental health treatment. "We need to do a paradigm shift around mental health," Bahorich told the panel before sharing statistics about the prevalence of mental illness among schoolchildren. She also mentioned the concerns over expecting school counselors to fulfill both a mental health treatment function and academic counseling responsibilities, noting that Texas has been discussing whether such roles should be bifurcated. The full listening session broadcast can be viewed here. (The segment featuring Bahorich begins at 1:25:25 during the broadcast.)

Expect school safety to remain a top issue for consideration during the 2019 legislative session. A Senate Select Committee on Violence in Schools and School Security held hearings on the issue this year and released an interim report of its findings earlier this month. Stay tuned to Teach the Vote for updates on this important issue.