From The Texas Tribune: Analysis: School districts are getting report cards. They shouldn’t be the only ones.

“Analysis: School districts are getting report cards. They shouldn’t be the only ones.” was first published by The Texas Tribune, a nonprofit, nonpartisan media organization that informs Texans — and engages with them — about public policy, politics, government and statewide issues. 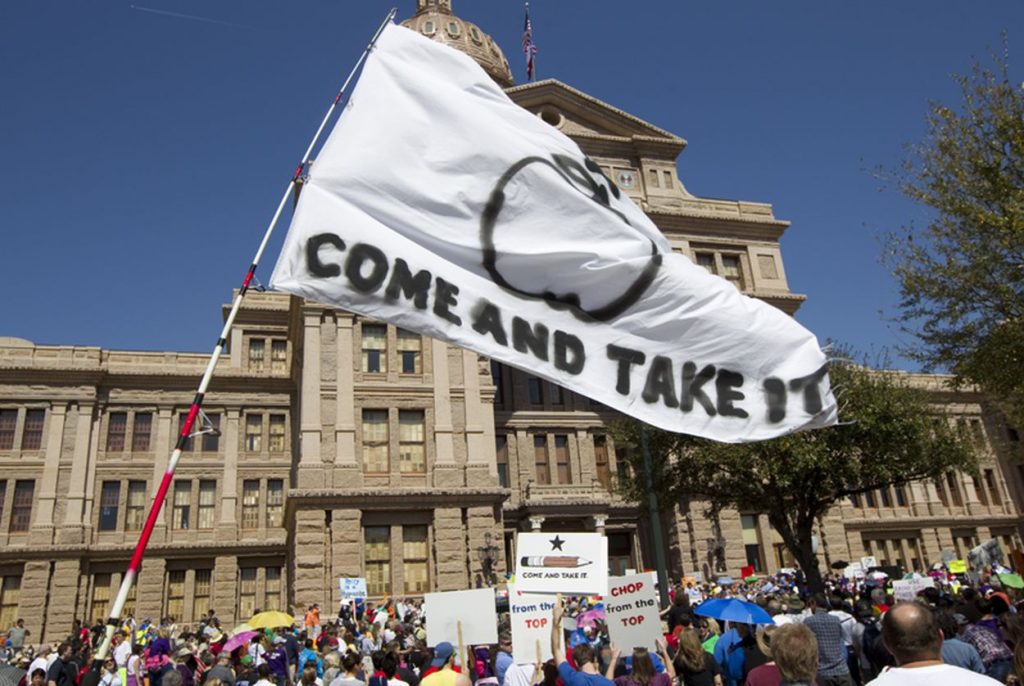 A "Come and Take It" flag depicting an apple instead of the traditional cannon at the Save Our Schools rally at the Texas Capitol on March 12, 2011. Photo by Bob Daemmrich.

It’s time to start grading the papers of the people elected to run the state of Texas, to translate voters’ thoughts and feelings about the way things are going into the job reviews that will be delivered in this year’s general election.

It’s the seasonal cycle of this electoral democracy. We elect them. They do stuff. We decide whether to keep or replace them.

Elected officials adore this sort of judgement when it’s directed at others.

Later today, for instance, the state will issue its inaugural set of A-F grades for more than 1,000 public school districts. That has agitated a lot of Texas educators; when the grades are out, odds are good that it will agitate — in ways both negative and positive — parents, business people and taxpayers. If the politicos are lucky, it will divert angst over public education in Texas away from the folks who’ll be on the November ballot.

Accountability is an admirable thing in politics. It can show citizens where responsibility lies, the better to direct their blame and, more to the point, where to repair or replace policies that don’t work.

It can also diffuse responsibility. When today’s school grades come out, keep an eye on who’s taking the heat and who’s getting the credit. Ask yourself, as it unrolls, whether the right people are getting the right kind of attention.

This is supposed to be a way for the government ministers in Austin and the public across the state to see what results they’re getting for their money. It’s controversial, to say the least. Educators contend the grading system is both too general — not taking the complexity of any given school district into account — and too reliant on standardized tests and other inappropriate yardsticks that don’t give accurate readings of educational progress. Many are not crazy about grades of any kind, but they’re irked that these grades, in their view, will give voters and policymakers false readings about school districts’ performance.

But for a Legislature that can’t muster a consensus for what public schools should do and what they should cost, it’s a way to outsource the blame from the pink building to local “educrats.”

It’s a pre-election test of whether voters trust politicians more than teachers.

Education isn’t the only forum for this sort of deflection. The telling sign is when the people at the top try to separate themselves from the people who work for them, a strategy that allows them to make policy and take credit for passing laws while also blaming someone else when the execution of those instructions falls short.

Maybe the blame should crawl up the management ladder; they’d rather you didn’t make the connection.

Rats, mold and other filth in state buildings? The budgeteers at the Capitol have been skimping on building maintenance and upkeep for years. Multi-billion-dollar contracting troubles at the Health and Human Services Commission? That sort of thing happens if you put all those disparate agencies into one pot and then wander off, forgetting the second part of the business maxim: “Put all your eggs in one basket — and then watch that basket very carefully.”

A federal “zero tolerance” immigration policy that splits adults and children at the border and then cannot reconnect them — whether they’re staying here or being sent home? That is, in fact, a bureaucratic nightmare. But it’s a product of bad design, of putting a policy in place before figuring out how it’s going to work. The blame for that kind of empty-headed governance belongs at or near the top of the organization chart. Roughly 500 of those kids are still unattached to the adults with whom they entered the country. That terrible foul-up took place at the border, but the credit and blame really belong to the high officials who got things rolling.

This is going to be a hard day for some school superintendents and school boards and a great day for others. In both situations, some of them deserve it. Some of them don’t. Examine the results. Make your own judgements. And when you pass out cheers and jeers, think of the people who are responsible for education policy who aren’t on today’s report cards.

They’ll be on your election ballot a few weeks from now.

This article originally appeared in The Texas Tribune at https://www.texastribune.org/2018/08/15/analysis-texas-school-report-card-election-2018/.