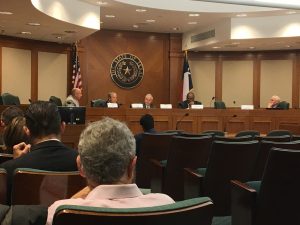 The first potential recommendations related to repeals that could free up “pots of money” to be reallocated. Commission Chair Scott Brister expressed confusion over how specific programs are funded, and suggested eliminating most programmatic funding and directing it toward the basic allotment instead. This included a discussion of repealing the high school allotment, the 1992-93 hold harmless provision, the staff allotment, the gifted and talented allotment, the public education grant (PEG) allotment, the transportation allotment, the local option homestead exemption for certain districts, the recapture discount, and the early agreement credit.

The staff allotment provides $250 for each part-time employee and $500 for each full-time not subject to the minimum salary schedule, which includes counselors and librarians – basically anyone who is not a teacher. State Sen. Royce West (D-Dallas) indicated he would be hesitant to repeal this allotment because he believes it serves its intended purpose. State Board of Education (SBOE) Member Keven Ellis contended that districts would be unlikely to reduce staff if that allotment were to go away.

State Sen. Larry Taylor (R-Galveston), who chairs the Senate Education Committee), proposed repealing the gifted and talented allotment. Sen. Taylor argued that most schools are already receiving five percent of their funding through this allotment, and including it into the basic allotment could allow districts more spending freedom. Sen. West clarified that members are not proposing that this money go away, only that it be delivered through a different mechanism, such as the basic allotment.

The discussion regarding the transportation allotment followed much the same logic. However, Member Ellis noted that rural districts face disproportionate transportation costs due to physical size and population density. Sen. Taylor suggested tying the funding to mileage. Sen. West offered the idea of weighted funding based on mileage. Chair Brister then questioned the value of schools having buses in general, suggesting that some districts would do better to simply encourage parents to carpool.

Rep. Huberty suggested PEG grants should be left alone because they offer a real incentive for districts to accept transfer students. It’s important to note that this is often cited as a key component of the public school choice system.

Sen. Taylor suggested that pre-K is one of the areas in which districts could invest general dollars that have been untethered from specific programs, as discussed. The group discussed whether to incentivize half-day or full-day pre-K in order to achieve the goal of getting students reading by the third grade.

The group also discussed changing the equalized wealth level and simplifying the funding tiers, the recapture system in general, and the basic allotment. Brister contended that discussing recapture should be the purview of the working group on revenue, which is led by state Sen. Paul Bettencourt (R-Houston). With regard to the basic allotment, members expressed concern over tying the hands of future legislatures by tying funding to a rising cost such as inflation.

Members discussed the adjusted allotment, and Sen. Taylor proposed additional funding for charters. Sen. West quickly voiced opposition to charter expansion and the group quickly moved onto the next topic.

A larger discussion focused on the cost of education index, which was passed in 1984 and last updated in 1991. Member Ellis discussed moving to a more relevant index that includes teacher salaries. Sen. Taylor suggested districts also experience large variations in the cost of transportation, which could play a part in a CEI replacement. Rep. Huberty pointed out that even if the CEI were updated today, it would be out of date again within a few years.

The group took a look at the district size adjustments for small- and mid-sized districts, and Brister expressed the feeling that many smaller districts should be consolidated. Member Ellis noted that many rural districts have already consolidated services such as transportation and food services. Sen. Taylor suggested looking for ways to encourage districts to consolidate.

On the issue of attendance, Sen. Larry Taylor suggested moving away from attendance-based funding requirements. Again, the argument for doing so was to give districts more flexibility, particularly at the high school level.

Members continued to focus on flexibility with regard to career and technical education (CTE), while expressing support for encouraging CTE and expanding middle school programs from eighth to as early as sixth grade. Regarding compensatory education, members discussed moving the identifying mechanism away from using free and reduced-price lunch. Members also looked at expanding the definitions to serve more low-income students who may not technically qualify under the current system. Regarding weights, the group discussed a hypothetical increase to the compensatory education weight to between .225 and .275.

On the issue of facilities funding, Rep. Huberty pointed out that legislators already voted to increase the new instructional facilities allotment (NIFA), but the system was stretched so thin that the anticipated benefit was not fully delivered. The next step would be to increase the cap from $25 million to $100 million. Sen. West again voiced concern about the saturation of charter schools.

The group then discussed staffing, beginning with a proposal to allow staff members’ children to take advantage of free pre-K. Rep. Huberty then talked about teacher compensation, including programs intended to incentivize top teachers to work at campuses facing the toughest challenges. Lopez suggested a tiered pay program that rewards high-performing teachers would have a low initial startup cost, but would ramp up over time. Member Ellis emphasized the need for local control in setting salaries and implementing locally-developed programs, such as the Dallas ISD program that is often cited as an example of a working performance pay system. Sen. Taylor suggested providing funding for this on the back end for districts that have already put these programs into practice.

Members were unanimous in its support for mental health and wellness programs, but indicated the subject may be beyond the purview of the commission.

The group noted changes to the Teacher Retirement System (TRS) of Texas ranging from adjusting the anticipated rate of return to rising drug costs and benefit reductions. Chair Huberty also indicated this subject may best be tackled by the relevant legislative committees. Notwithstanding this, the group entertained a discussion of requiring charter schools to pay into TRS at the same rate districts are required to pay. Lopez noted the interaction between district TRS contributions and the CEI, should the CEI go away.

Rep. Huberty asked TEA to pull a report together within the next 30 days, so the working group can schedule another public meeting to formally adopt its recommendations. Brister suggested getting recommendations to the full commission by mid- to late October so that the commission could consider them in November.