The Texas Commission on Public School Finance met Thursday morning in Austin to discuss the role of tax revenue in the school finance system. Chairman Justice Scott Brister began the meeting by apologizing for comments about disabled children he made during a meeting of the working group on expenditures. 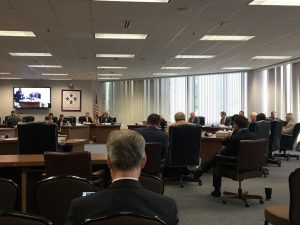 “I never suggested that any group of kids should be excluded from public funding or from being educated,” said Brister. State Sen. Larry Taylor (R-Friendswood), who chairs the Senate Education Committee, blamed the media for taking Brister’s comments about “slow” children out of context.

Brister followed by announcing that the working groups are not working as intended, specifically noting that attempts to hold meetings by teleconference have yielded less than stellar results. The chairman suggested members may instead call additional witnesses to the full commission’s May and June meetings and postpone working group recommendations to later in the year.

Additionally, Brister indicated what sort of recommendations he is seeking. Those recommendations include “how to get more with what you’ve got,” “all you can get from the taxpayers otherwise,” and how to address the concerns of those who argue still more funding is needed.

Texas Education Agency (TEA) Chief School Finance Officer Leo Lopez was the first to testify, and outlined state sources of school revenue. State Sen. Paul Bettencourt (R-Houston) argued for recapture, or “Robin Hood” taxes paid by local taxpayers, to be counted as state funding. House Public Education Committee Chair Dan Huberty (R-Houston) pointed out that the state comptroller has consistently counted recapture as local funding. If recapture were counted as state funding, it would falsely inflate the percentage of school funding contributed by the state, which is currently around 38 percent.

The next panel featured a pair of representatives from the comptroller’s office. Texas does not have a statewide property tax, but it does have a statewide sales tax. Various sales taxes account for around two-thirds of all state revenue collections. Collections from the business franchise tax, which was initially created in order to help ease the property tax burden on homeowners, have steadily shrunk as lawmakers have chipped away at the tax over time. State Rep. Diego Bernal (D-San Antonio), vice chair of the House Public Education Committee, asked the comptroller’s office to prepare a report on education funding streams that have been cut by the legislature over the past ten years.

San Jose State University Professor Anette Nellen presented what an ideal tax system should consider, and her presentation led to a spirited conversation about whether the internet should be taxed. Nellen was followed by former chief revenue estimator James LeBas, who offered a summary of a book he wrote on tax law turning points. LeBas concluded that previous attempts to “buy down” local property taxes were thwarted by increases in property values, bond elections and other factors. He argued no such effort will be successful without continuously increasing funding, restricting local tax increases, or some combination of both.

The final panel involved testimony from several businesses, including Phillips 66, Texas Instruments and P. Terry’s Burger Stand. Business interests emphasized that taxes are a major consideration when it comes to where companies choose to locate and do business. A representative from the Texas Association of Builders testified that high property taxes are a hurdle to home ownership, however many homeowners choose where to buy based upon the quality of local schools. Patrick Terry, the founder and owner of P. Terry’s, testified that the rapid increase in property taxes is making it more difficult to provide discretionary benefits to employees and make charitable contributions to community organizations. More significantly, Terry suggested it is likely discouraging more entrepreneurs from entering the economy. Wayne Gerami, vice president at Austin Habitat for Humanity, suggested that some states utilize a “circuit breaker” provision, which caps an individual’s property tax burden at a certain percentage of their income.

Before adjourning, Brister confirmed that the reports from commission working groups will be delayed until September. The commission is scheduled to meet again on April 19.