The State Board of Education (SBOE) met Wednesday morning for a list of items, beginning with an update from Texas Education Agency (TEA) Commissioner Mike Morath on a recent glitch with the STAAR test, statewide test scores and the special education corrective action plan. 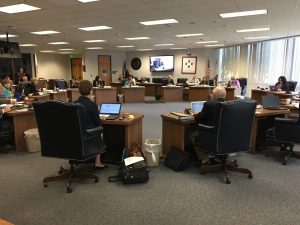 The board took testimony Wednesday morning from members of the public advocating for the addition of Texas Essential Knowledge and Skills (TEKS) for an elective course in Mexican American Studies. This has been an ongoing topic of conversation and debate at the board.

On a motion by Member Georgina Perez (D-El Paso), the board ordered the TEA to develop TEKS for a Mexican American Studies course based upon an innovative course created by Houston ISD. Agency staff suggested that without making modifications to the Houston ISD course, initial TEKS could be ready to be considered on first reading by June.

The board also approved a motion by outgoing Member David Bradley (R-Beaumont) to rename the course “Ethnic Studies: An Overview of Americans of Mexican Descent,” arguing he is against “hyphenated Americans.” The amendment was forcefully opposed by Members Marisa Perez (D-Converse) and Ruben Cortez (D-San Antonio). Member Tom Maynard (R-Florence) noted that the board could amend the name again at a future date in the event constituents voice disapproval of the name change.

Finally, on another motion by Member Georgina Perez, the board voted to fast-track additional ethnic studies courses, including courses addressing Latinos, Asian and Pacific Islanders, African-Americans, and Native Americans.

The board also discussed the curriculum for instruction on Proper Interaction with Peace Officers, which was required by Senate Bill (SB) 30 passed by the 85th Texas Legislature in response to recent officer-involved shootings around the country. The agency has planned a pair of videos to supplement the instruction, and the board voted on first reading to add elements to the current proposal that would require completion of the instruction to be recorded in each student’s record.

Finally, TEA staff updated the board on the new TEKS review process currently underway for social studies. Teacher reviewers participate in a rolling working group format under the new process. Through this process, one of the working groups created a rubric assigning points to certain historical figures in order to determine who should be specifically included in the TEKS. Materials developed by the working groups can be viewed on the TEA website. Staff aims to present the new TEKS to the board for first reading in September and a final vote in November.

Board committees are scheduled to meet Thursday morning, and several board members are expected to participate in an update Thursday afternoon on the Long-Range Plan for Public Education. The full board formally returns Friday.