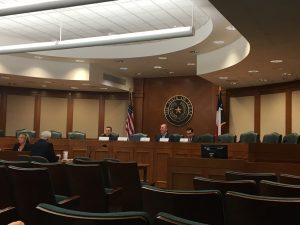 The first invited witness was former U.S. Assistant Secretary of Education Tom Luce, who emphasized that education is the future of Texas. Luce began by warning that Texas schools are not preparing students for post-secondary success. Furthermore, an ill-prepared workforce will lead to decreasing median incomes and an increased financial burden on the state.

“We have to do more with more, not more with less.” said Luce, who suggested looking to current tax exemptions for ways to generate additional revenue. “Money matters.”

Luce served as chief of staff to the Texas Select Committee on Public Education in 1984 and participated in the last major reform of the Texas school system. Without another reform, Luce predicted Texas is doomed to fall behind academically and economically. Reforms suggested by Luce include offering incentives for students to take AP exams, full day pre-K, and boosting overall funding. In order to secure the necessary additional funds for public schools, Luce argued stakeholders must explain to taxpayers what the system is going to accomplish differently than what it is currently doing.

Other witnesses laid out similarly concerning views of the state’s current success preparing students for post-secondary success, whether that means pursuing career certification or finishing college. Failure to achieve post-secondary success means graduates entering the workforce and settling for lower-wage jobs, leading to more reliance on government entitlement programs. Together, this means a degraded tax base increasingly unable to support the social safety net programs upon which it relies.

A representative from the Commit Partnership in Dallas, of which Williams is chairman and CEO, drew attention to student demographics and the link between race and poverty in Texas. In addition, performance gaps between demographic groups have remained constant despite improvement in the overall student population. In order to close these gaps, Commit suggested focusing on pre-K and third grade literacy. Dr. Killian indicated he has seen the number of children who are unprepared for kindergarten increase over time, but access to pre-K has proven an effective way to counter this trend.

Deputy Commission David Gardner from the Texas Higher Education Coordinating Board (THECB) was the last to testify, and offered an explanation of the “60×30” graduation goal. The plain aims for 60 percent of Texas high school graduates to complete a post-secondary degree or certificate by the year 2030. Gardner pointed out that the longer students wait between graduating from high school and entering college, the less likely they are to graduate from college. At the end of the meeting, Killian told Gardner he believes the higher education system should have an accountability system just like the K-12 education system.

The full commission is set to meet Thursday morning, when it will discuss issues related to tax revenues.