The State Board of Education (SBOE) kicked off its April meeting Wednesday with an update from Texas Education Agency (TEA) Commissioner Mike Morath.

Morath informed the board that the agency will seek an amendment to the state’s plan under the federal Every Student Succeeds Act (ESSA) in order to implement changes to the accountability system under House Bill (HB) 22 passed by the 85th Texas Legislature. The agency released its accountability framework on Tuesday. 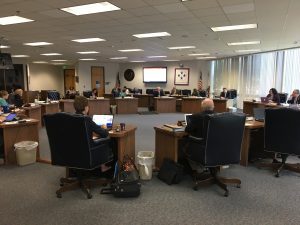 With testing week underway, Morath updated the board on a recent glitch with the STAAR exam. According to the commission, the failure of a single server caused a roughly 20-minute disruption in the exam. No data were lost, although 40,000 students were affected and forced to log out, then log back in, while taking the exam online. Some 1,000 school systems had one or more students affected, and it appears the glitch was largely confined to those taking the English I end of course (EOC) exam, although exceptions have been reported. Roughly 460,000 tests have been taken online so far.

SBOE Member Pat Hardy (R-Fort Worth) suggested the board avoid scheduling meetings during testing week in the future, as it makes it nearly impossible for educators to get time off to attend board meetings or to testify before the board. TEA staff indicated they are aware of the scheduling conflict and are working toward avoiding such a situation in the future.

The commissioner next proceeded to run down the state’s recent results on the National Assessment of Educational Progress (NAEP). Texas saw a slight decline in 4th grade math proficiency this year and has experienced a downward trend in 8th grade math since 2011. The state has been a middling performer in 4th grade reading and saw a slight recent dip. Scores on 8th grade reading have been similarly flat, with a slight recent decline. Morath called the NAEP scores “somewhat disappointing nationally.”

“It does appear that accountability matters a great deal, and resources appear to be a factor,” Morath added.

Member Hardy pointed out that Texas has different demographic challenges than other states; in particular, it is home to a high percentage of students who are economically disadvantaged. Hardy suggested this makes for apples-to-oranges comparisons to other states when it comes to national test scores. Morath conceded Hardy’s point, but noted that “life doesn’t grade on the curve.” The commissioner warned the real world deals in absolutes, and suggested it’s important to celebrate success where appropriate while continuing to pursue improvement.

Finally, Morath updated the board on the agency’s corrective action for special education. A January letter from the U.S. Department of Education found Texas was deficient in three areas of special education: Child find, providing a free and appropriate public education (FAPE), and compliance monitoring.

According to the commissioner, the core corrective action response will be provided to the federal government for compliance purposes, while a strategic plan for the state will focus on broader reforms. The commissioner identified five key components of the strategic plan: State monitoring, identification, evaluation, and placement; training, support, and development; student, family, and community engagement; and support networks and structures. The final corrective action response is due to the federal government April 23.

Responding to funding questions from Member Keven Ellis (R-Lufkin), Morath indicated the agency has already begun making staffing changes with federal funds available to the agency under the Individuals with Disabilities Education Act (IDEA). The agency has already hired 34 full-time equivalents (FTEs) in order to begin implementing the necessary changes. The nature of the plan calls for spending shifts in allocation. The state is allocated roughly $100 million in IDEA funds each year, all of which Morath said are being “re-tooled” concomitant with the corrective action plan.

Asked by Ellis how formula funding under the Foundation School Program (FSP) would be affected by the plan, Morath said the special education formulas are “quite sophisticated,” making it hard to give a specific number. As a ballpark estimate, Morath estimated the plan would add another $5,000 for each new special education student. The agency estimates another 200,000 students could enter the system, which would translate to about $1 billion in additional FSP funding. Morath noted the figures are only rough estimates, and actual funding would depend upon which services are provided to each child under his or her individualized education program (IEP).

Member Sue Melton-Malone (R-Waco) asked about training provided to educators under the plan. The commissioner said the agency is preparing to launch a statewide professional development network involving summer programs and ongoing training. This training will be primarily targeted at mainstream setting educators.

On a separate note, Member Lawrence Allen, Jr. (D-Houston) voiced concern to Commissioner Morath over the board’s lack of oversight of contracts between school districts and charter schools as a result of Senate Bill (SB) 1882 passed by the 85th Texas Legislature. This bill provides financial incentives and a pause in accountability ratings for districts to contract with a charter holder, nonprofit or higher education institution to operate a campus under a “partnership” model in which the district surrenders control entirely to the operator. As ATPE has warned, this has potentially troubling implications for school staff and students in the feeder pattern.

While the SBOE has the final authority to approve new charters, it has no formal input regarding these arrangements. Rather, each contract must be approved by the commissioner. Agreeing with Allen, Member Hardy warned that charters may be less faithful to the Texas Essential Knowledge and Skills (TEKS), which are required curriculum approved by the board.

The board is scheduled to consider a variety of items Wednesday, including potential action regarding the creation of a Mexican American Studies class. Continue to check TeachTheVote.org for further updates from this week’s SBOE meeting.