The State Board of Education (SBOE) met Tuesday to undertake work sessions on school finance and new textbooks. After spending the morning reviewing the history and operation of the Permanent School Fund (PSF), the board began the afternoon with an update from Texas Education Agency (TEA) Commissioner Mike Morath. 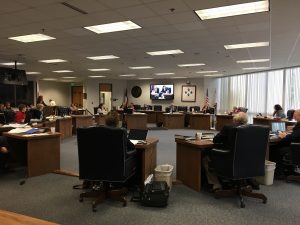 “The work related to Hurricane Harvey is ongoing,” Morath told the board. The commissioner drew the board’s attention to rule changes initiated by the State Board for Educator Certification (SBEC) that are tied to the state’s “grow your own” strategy to recruit more highly skilled teachers.

“There is increasing strain on school systems and their ability to hire teachers,” said Morath, who added the strain is most acutely felt in rural settings. The commissioner explained that there are students in schools throughout the state who are thinking of becoming doctors and lawyers. Morath then posed the question: Are we creating incentives and pathways for them to become teachers?

The SBEC rule changes subject to the board’s approval this week are aimed to help schools that offer CTE courses in the field of teaching as part of the “grow your own” strategy. The rule change would allow districts to place any teacher, regardless of their certification area, in charge of “Ready, Set, Teach” courses.

The commissioner also updated the board on improvements to the agency’s STAAR report card at www.TexasAssessment.com. Following the commissioner’s presentation, the board turned its attention to Proclamation 2018. The board voted to extend the deadline by two weeks for Kendall Hunt, a publisher that was unable to meet the published deadline as a result of the flooding caused by Hurricane Harvey.

Board members returned Wednesday to tackle a lengthy agenda. The board declined to add a Mexican-American studies textbook to the list of approved instructional materials. The board adopted changes to correct inconsistencies in the Texas Essential Knowledge and Skills (TEKS) for Career and Technical Education (CTE).

Members next turned their attention to changes to graduation requirements made by legislation passed by the 85th Texas Legislature. The board approved rule changes to align with legislation that eliminates sequencing requirements for advanced mathematics and English courses. The board debated at length how certain computer science courses could satisfy graduation requirements for languages other than English (LOTE) and/or advanced mathematics. Members cast a preliminary vote to allow courses to satisfy both requirements, while counting as a single course credit.

The board also considered rules regarding International Baccalaureate (IB) courses, and received an update following previously-adopted changes to the TEKS review process. After receiving many volunteers to serve in TEKS review work groups, TEA staff indicated more volunteers are needed for elementary-level panels.