The House Public Education Committee met Tuesday morning to consider a large agenda of Senate bills as the session winds down. The committee also approved the following bills Tuesday evening:

The meeting began with SB 1566 by state Sen. Lois Kolkhorst (R-Brenham), which would hand broad powers to local school boards to compel the testimony of district officials and obtain district documents. It would also require the Texas Education Agency (TEA) develop a website for boards to review campus and district academic achievement data. 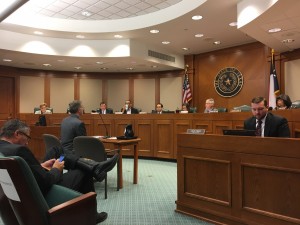 SB 1294 by state Sen. Dawn Buckingham (R-Lakeway) would prohibit “exclusive consultation,” ensuring that educators on campus-level advisory committees do not all belong to a single professional association. ATPE supports this bill.

SB 1660 by Sen. Taylor would allow districts to choose between using either minutes or days to calculate operation. According to the fiscal note, SB 1660 could cost the state $1.7 million through the biennium ending August 31, 2019.

SB 195 by state Sen. Sylvia Garcia (D-Houston) would allow additional transportation allotment funding to districts with children living within the two mile zone who are at a high risk of violence if they walk to school. In the fiscal note, the Legislative Budget Board indicated that there is insufficient data regarding the number of students who are at risk of violence to be able to calculate a fiscal impact. ATPE supports this bill.

SB 1854 by state Sen. Carlos Uresti (D-San Antonio) would require district-level committees to review paperwork requirements annually and recommend to the board of trustees instructional tasks that can be transferred to non-instructional staff. ATPE supports this bill.

SB 384 by state Sen. Konni Burton (R-Colleyville) would give the State Board of Education (SBOE) flexibility in scheduling end-of-course exams to avoid conflicts with AP/IB national tests.

SB 1883 by Sen. Campbell would modify the approval process for charter applicants and the review of charter operators. ATPE opposes the bill because the removal of elected officials from the charter school process is irresponsible. Adding unnecessary new appeal and review opportunities for charters only creates administrative bloat.

SB 1005 by state Sen. Donna Campbell (R-New Braunfels) would allow the use of the SAT or the ACT as a secondary exit-level assessment instrument to allow certain public school students to receive a high school diploma. The fiscal note estimates an annual cost of $2 million per year.

SB 1839 by state Sen. Bryan Hughes (R-Mineola) would create a certification for early childhood through grade three, and would grant the commissioner authority to set reciprocity rules regarding the ability of teachers from outside the state to obtain a certificate in Texas. ATPE believes that the State Board for Educator Certification (SBEC), as the official state body charged with the oversight of educator standards, is the more appropriate authority to set these rules.

SB 2270 by Sen. Lucio would create a pilot program in ESC Region 1 to provide additional pre-K funding for low-income students.

SB 1784 by Sen. Taylor would encourage the use of "open-source instructional materials."

SB 2188 by Sen. Taylor would specify that a student who is 18 or older in an off home campus instructional arrangement is a full-time student if they receive 20 hours of contact a week. Part-time would be defined as between 10 and 20 contact hours per week. According to the fiscal note, SB 2188 would cost roughly $7 million through the next biennium. ATPE supports this bill.

SB 463 by state Sen. Kel Seliger (R-Amarillo) would extend individual graduation committees (IGCs) to 2019 and order the Texas Higher Education Coordinating Board to compile a report tracking the progress of IGC graduates. ATPE supports this bill.

SB 2039 by state Sen. Judith Zaffirini (D-Laredo) would develop instructional modules and training for public schools on the prevention of sexual abuse and sex trafficking. ATPE supports this bill.

SB 1398 by Sen. Lucio makes lots of clarifying and limiting changes to the classroom video camera law. Among them, the bill would require requests in writing and only require equipment in classrooms or settings in which the child is in regular attendance or to which the staff member is assigned.

SB 1886 by state Sen. Paul Bettencourt (R-Houston) would create an office of the inspector general at TEA appointed by the commissioner to prevent and detect criminal activity in districts, charter schools, and education service centers (ESCs). The bill would allow the new TEA inspector general to issue subpoenas in order to secure evidence.

SB 490 by state Sen. Eddie Lucio, Jr. (D-Brownsville) would require a report on the number of school counselors at each campus. ATPE supports this bill.

SB 1484 by Sen. Taylor would create a web portal and instructional materials repository to assist schools in selecting open education resources. The bill provides for a third party to provide independent analysis regarding TEKS alignment. According to the fiscal note, SB 1484 would not require additional state funding, but would result in an additional cost of $1.85 million in fiscal year 2018 and $450,000 in subsequent years that would be paid from existing instructional materials funding.

SB 1658 by Sen. Taylor would make changes to laws regarding the ownership, sale, lease, and disposition of property and management of assets of an open-enrollment charter school.

SB 2078 by Sen. Taylor would require TEA develop a model multi-hazard emergency operations plan and create a cycle of review. The fiscal note anticipates a fiscal impact of roughly $215,000 per year.

SB 2144 by Sen. Taylor would create a commission to recommend improvements to the public school finance system. ATPE supports this bill.
Previous
Next