School finance bill on its way to full House 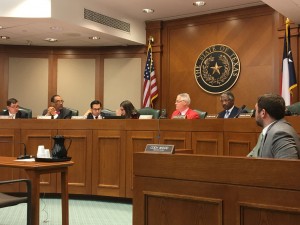 Huberty hearkened back to his days as a school board member to explain his longstanding goal of finding a grand fix for the state’s troubled school finance system. The chair noted, “While we’re not there, this is a good first step.” Casting the lone vote against the committee substitute to HB 21, state Rep. Morgan Meyer (R-Dallas) noted HB 21 increases recapture payments by Highland Park ISD. According to model runs produced by the Legislative Budget Board (LBB), Highland Park ISD would lose $1.6 million in fiscal year 2018, worth $80 per student weighted average daily attendance (WADA). HB 21 now heads to Calendars, where it will be scheduled for debate on the House floor. With the exception of state Rep. Harold Dutton casting a vote of “present” on HB 1291, the committee unanimously approved the following bills heard previously: