Dan Huberty To kick off the hearing, Chairman Dan Huberty (R-Kingwood) rattled off a number of statistics related to public education.

A total of 156 bills have been referred to the House Public Education Committee thus far this session, and the committee anticipates receiving another 131 bills that have been filed and are awaiting referral. The House budget, House Bill (HB) 1, includes $44 billion in all funds for the Foundation School Program (FSP) for fiscal year 2017-18, including a $1.5 billion increase in public education funding contingent upon school finance reform. 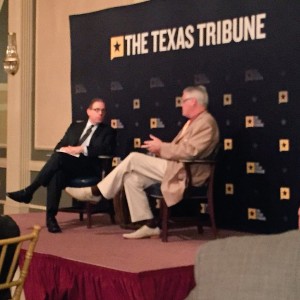 Before presiding over today's committee hearing, Chairman Huberty participated in an early morning discussion hosted by the Texas Tribune and sponsored in part by ATPE. There, Huberty told Texas Tribune executive director Evan Smith that school finance reform could take two to three sessions to complete. He also confirmed the Senate’s voucher proposals are dead in the House. Huberty pointed out that Texas already has robust “school choice” in the form of charters, magnet schools, public school transfers, and other options. The chairman emphasized that handing out public tax dollars to private ventures without any accountability is at odds with conservative principles.

Committee testimony began Tuesday afternoon with a brief rundown of the laws and legal decisions impacting public education funding. For example, the Cost of Education Index (CEI) has not been significantly changed since 1990. Of critical relevance to school finance discussions, the Texas Constitution prohibits a statewide property tax. TEA general counsel Von Byer testified that while the state can rely on local property taxes to help fund schools, it can’t set up a system where the state directly controls that property tax.

House leaders have wisely pointed out the see-saw relationship between state and local funding for schools. As the share of public education funding provided by the state has steadily declined over the years, local property taxes have risen in order to make up the difference. Chairman Huberty repeatedly pointed out that meaningful property tax relief is necessarily contingent upon the state taking the burden back from local districts.

The majority of testimony focused on districts representing a variety of financial challenges. The committee heard from Dallas ISD, which is about to enter recapture while facing a concurrent drop in enrollment. The state’s largest district, Houston ISD, faces a looming $160 million recapture payment, despite serving a historically impoverished student population. The district has already cut $40 million of that from classrooms, including cuts to teachers, tutoring programs, nurses, librarians, social workers, and counselors. Houston ISD recommended the committee increase the basic allotment, count full-day pre-K students in weighted average daily attendance (WADA), restore the transportation allotment for all Chapter 41 districts, include the homestead exemption in the school funding formula, and allow districts a mechanism to reattach real property detached by TEA in order to meet wealth equalization requirements. Austin ISD, which is scheduled to pay the state’s largest recapture payment of $536 million next year, noted that the state relies on district recapture payments to reduce its funding responsibility by $2 billion. As property values and inflationary costs increase, the state – not districts – benefits. Austin ISD suggested lawmakers tie property value increases to an increase in the basic allotment, update the CEI, allow Chapter 41 districts to receive the transportation allotment, include full-day pre-K in WADA, and increase the number of “golden pennies” of taxing capacity exempt from recapture available for local districts.

Other district administrators testified regarding the myriad issues facing public schools, including rapid growth that in many cases outpaces available facilities funding, growing populations of students with special needs and English Language Learners, and an increasing proportion of low-income students locked in generational poverty. 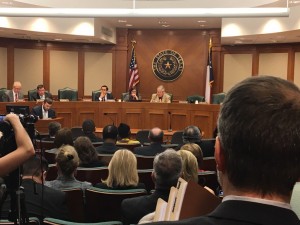 Representing fast-growth school districts, Denton ISD superintendent Jamie Wilson recommended increasing funding under the New Instructional Facilities Allotment (NIFA), as well as options to provide more flexibility when it comes to setting local tax rates. The South Texas Association of Schools advised against structural changes to the school finance system, but encouraged lawmakers to allocate the additional $1.5 billion under HB 1 toward the basic allotment and commit to educational cost studies during the interim. KIPP Public Charter Schools co-founder Mike Feinberg testified that public charter schools receive less per-pupil funding than traditional schools, which is often offset by fundraising, financing, or both. Feinberg fielded questions regarding student due process, the accuracy of much-touted wait list numbers, and the state’s liability for charters that have accessed bonds backed by public tax dollars. Huberty notably inquired how quickly charters would be able to expand if additional facilities funding were made available, and hinted at a role for future charters focused on special needs populations.

Rep. Gary VanDeaver (R-New Boston) inquired several times as to the effect on state funding if a student who is new to Texas were to choose a charter school as opposed to a traditional public school. The question received varying answers, with witnesses noting that funding levels vary from district to district. Among those working on an overall plan to simplify the system, Ray Freeman with the Equity Center outlined a proposal to stabilize and streamline funding through a single-sentence formula. Pursuant to a system overhaul, Freeman indicated lawmakers may desire a transition plan funded through a budget line item.

Vice-chairman Diego Bernal (D-San Antonio) noted that as demographics shift and wealth inequality deepens, the “average student” of today looks different from that of years past. More than half of Texas students are Hispanic and 59 percent are economically disadvantaged. Considering these changes, Bernal suggested lawmakers may want to reassess some funding methods based on certain special populations in favor of reorienting the system as a whole.

The hearing concluded with testimony from organizations whose advocacy is not limited to the public education realm. Huberty sharply questioned a representative from the pro-voucher Texas Public Policy Foundation over why voucher supporters oppose any accountability for public tax dollars diverted to private institutions.

The committee will begin considering specific school finance-related legislation when it meets next Tuesday, March 7. Stay tuned to Teach the Vote for updates.
Next