Editor's note: This story has been updated throughout. 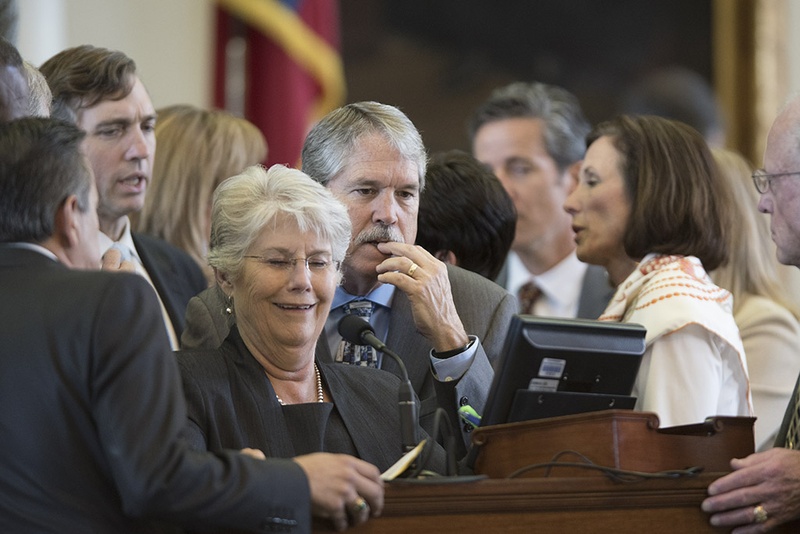 Texas senators spent hours on Thursday questioning how a “private school choice” bill would hold private schools accountable or help students with disabilities before voting to give it final passage, 18-13.

They voted out a floor substitute of Senate Bill 3 that limits the scope of the two public programs proposed to subsidize private school tuition. The version passed by the upper chamber would limit eligibility for the programs to students who have attended a public school for at least a year, prevent incoming kindergarteners from participating and would exclude counties with populations under 285,000 from participating unless 5 percent of registered voters petition the county for access.

The changes seemed directed to appeal to rural legislators with constituents who have fewer options for public schools and to those with concerns about the state costs of a major subsidy program.

“Basically, what we’ve done with this floor substitute is narrow it,” said Senate Education Committee Chairman Larry Taylor, R-Friendswood, author of the bill. “We didn’t add things. We took things away.”

Republican Sens. Kel Seliger of Amarillo, Joan Huffman of Houston and Robert Nichols of Jacksonville voted against the bill along with almost every Democrat. Sen. Eddie Lucio Jr., D-Brownsville, was the lone Democratic vote in favor.

The second would be a tax credit scholarship program, letting businesses credit their insurance premium taxes in exchange for donations to approved scholarship organizations. The current version of the bill would cap that program at $25 million in the next fiscal year, instead of $100 million in the previous version.

The current version would also require that 75 percent of funding for each program be dedicated to paying for tuition and the other 25 percent for education expenses, such as tutoring and special education services.

Taylor said the bill in its current form would save $55.3 million by 2022 because under the program, the state would be paying just 75 percent of the cost to educate each public school student who decides to take a tuition subsidy for a private school. Only students already enrolled in public schools would be able to access the program, meaning the state would be paying less for each student who moved from public to private school, he said.

Left-leaning policy organization Center for Public Policy Priorities released its own fiscal analysis on Thursday showing the bill would cost the Texas public school system more than $500 million per year.

“As many senators mentioned today by citing CPPP’s analysis, Senate Bill 3 is still undeniably the wrong solution for Texas kids because it would drain state dollars from already under-funded public schools,” executive director Ann Beeson said in a statement after the vote. “Instead of shifting our tax dollars to private school tuition, the Legislature should remodel our outdated school finance system.”

In calculations for previous versions of the bill, the Legislative Budget Board estimated a cost to the state of between $90 million and $330 million; Taylor did not release the new fiscal note to the Senate before taking up the bill.

Most of the almost four-hour debate revolved around whether private schools would be held to state standards and whether the bill would actually help students with disabilities.

Sen. José Rodríguez, D-El Paso, offered up an amendment to require private schools to be held accountable to the state's A-F rating system, which will soon be in place for public schools. Taylor argued parents would leave any private school that was not working for them, representing a strong accountability system outside of the state.

“I understand Sen. Taylor saying accountability is with the parents,” Rodriguez said. “But we’re not getting to the core of what people would like to see when it comes to these types of programs.” Taylor rejected his amendment, and it failed 13-18 in a subsequent vote.

Sen. José Menéndez, D-San Antonio, successfully amended the bill to require letters be sent to parents who take the subsidies for private schools, letting them know private schools are not required to serve their students with disabilities under federal law. Taylor agreed to that change.

The bill now goes to the House, where House Public Education Committee Chairman Dan Huberty, R-Houston, has said it will die.

Read more Tribune coverage here: Disclosure: The Center for Public Policy Priorities has been a financial supporter of The Texas Tribune. A complete list of Tribune donors and sponsors is available here.
This article originally appeared in The Texas Tribune at https://www.texastribune.org/2017/03/30/senate-school-choice-bill/. Texas Tribune mission statement The Texas Tribune is a nonprofit, nonpartisan media organization that informs Texans — and engages with them — about public policy, politics, government and statewide issues.
Previous
Next