Lt. Gov. Dan Patrick outlined a plan Thursday that on the surface promised a raise for teachers and relief for rate hikes resulting from the TRS-Care funding shortfall which lawmakers only partially covered during the regular session of the 85th Texas Legislature. 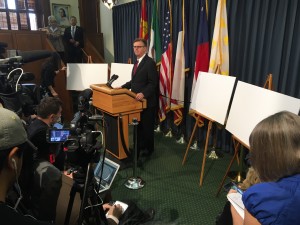 Patrick proposed to provide pay increases and bonuses based on longevity, which is at odds with what is widely expected to be a performance-based plan offered by Gov. Greg Abbott. A $1,000 pay raise for the state’s roughly 350,000 teachers would carry a state fiscal note of approximately $700 million over the next biennium. Abbott and Patrick have both suggested raises could be funded through existing district budgets, which in reality would amount to an unfunded mandate districts would be unlikely to afford.

The budget passed by the Texas Senate during the regular session spent nearly $2 billion less on public schools, forcing districts to rely even more on local property tax revenue to keep funding flat relative to inflation and enrollment growth. In an unsuccessful effort to pass a voucher bill unpopular with Texas voters, the Senate blocked a plan by the House to invest an additional $1.6 billion in public education that would have increased overall funding and provided relief to schools facing potential closure as a result of the loss of Additional State Aid for Tax Relief (ASATR) funds.

On Thursday, Patrick suggested providing $150 million in relief to the mostly small, rural schools that now face a funding crisis and putting another $200 million into the Teacher Retirement System (TRS). The system was forced to raise rates in June after the legislature covered roughly half of the $1 billion shortfall facing TRS-Care heading into the 2017 legislative session.

The House plan would have made use of a common budget process known as a deferral, which Lt. Gov. Patrick referred to Thursday as a “Ponzi scheme.” Yet the lieutenant governor suggested finding $700 million in funding for his plan by using just such a deferral – this time for payments to managed care organizations. In the long term, Patrick suggested using $700 million of the $1.3 billion the Texas Lottery already sends to public education. It is important to note that such a procedure would not involve new funding, and could force local districts to cut spending in other areas in order to cover the cost.

ATPE maintains that teachers deserve a raise and relief from rising health care costs that is fully funded by the state. Without a formal proposal to review, it is difficult to judge the merits of the lieutenant governor’s plan. While it is heartening to hear the lieutenant governor acknowledge these as important issues, it’s difficult to take any proposal without new funding seriously.

The education community remains under attack by bills to weaken public schools through private school vouchers and legislation to silence educators by banning payroll deduction for membership association dues. Both the governor and lieutenant governor support these bills.