State Sen. Paul Bettencourt (R-Houston) has fired the first public shot in what has been a heretofore behind-the-scenes effort to discourage educators from voting en masse in the upcoming elections.

On Wednesday, Sen. Bettencourt submitted a request for a legal opinion from Texas Attorney General Ken Paxton regarding school districts that are actively promoting a culture of voting. In his request, Sen. Bettencourt raises grave concern over the prospect of school districts encouraging teachers, students, and staff to exercise their civic right and responsibility to vote.

In his letter, Sen. Bettencourt draws attention to the Educator’s Oath to Vote championed by the nonpartisan Texas Educators Vote coalition, of which ATPE is a member. The oath is a means for Texas educators to demonstrate their commitment to voting in 2018 by participating in the March primary elections and November general election. The coalition has long advocated for members of the education community to develop a habit of voting by taking part in all elections.

Guidance offered through the Texas Educators Vote (TEV) website is nonpartisan and discourages campus leaders from advocating for any candidate, issue, or party. In promoting increased participation in the democratic process, TEV materials correctly point out embarrassingly low voter turnout in Texas. In a state of nearly 27 million people and 19 million eligible voters, just 34 percent of the state’s 15 million registered voters voted in the 2014 gubernatorial election. Only 14 percent voted in the 2014 primaries.

Sen. Bettencourt’s letter further questions school districts’ legal ability to encourage teachers, staff, and eligible students to exercise their civic responsibility by voting, and whether school transportation can be used to offer assistance to those who may be otherwise unable to exercise their right to cast a ballot. Bettencourt argues that such support does not serve a public benefit.

“Rather, it is for only a certain few who are being asked to go to the polls by the school district to vote in a manner befitting their own self-interests, or those of particular organizations,” Bettencourt claims. Again, Bettencourt offers no further example of “self-interests” other than pointing to the oath to support Texas school children.

It is important to note that opinions from the Texas attorney general are non-binding, non-enforceable, and neither indicate nor create actual law. Opinions are often used as the starting point for formal litigation.

Sen. Bettencourt’s action comes amid mounting efforts to quietly discourage educators from voting as a group. These efforts include numerous public information requests targeting teachers’ and administrators’ e-mails. Such tactics are often employed by political operatives to create a chilling effect. 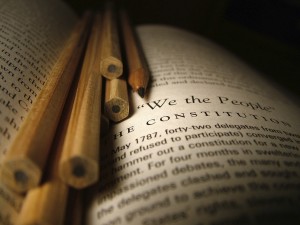 As long as the constitutions of Texas and the United States guarantee the right to vote, the law will continue to be on the side of those fighting to exercise their civic responsibility. Like our other coalition partners, ATPE strongly supports the right to vote and encourages all registered voters in Texas to exercise that right in every election. Educators are no exception, and the dedicated education professionals who work in our state's public schools should not be subjected to intimidation simply because of the fact that they have chosen to work in an institution of the government that some in power would prefer to dismantle. Those who are in fact opposed to the interests of more than 5.4 million Texas public schoolchildren clearly view educators as those children’s most formidable defenders. We anticipate more attacks on teachers similar to this as the March 6 primaries approach, and we will keep you updated as we find out new information and continue to stand up for educators' voting rights.