The House Public Education Committee met Tuesday to hear a number of bills, including those dealing with special education, and to advance a key piece of legislation relating to accountability. 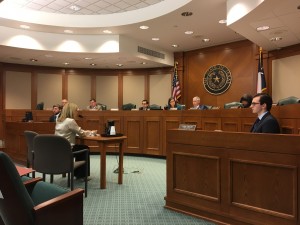 House Public Education Committee meeting April 4, 2017. During a break in testimony Tuesday afternoon, Chairman Dan Huberty (R-Houston) introduced a committee substitute to HB 22, which would modify the “A through F” accountability system. As filed, the bill would collapse the five domains down to three and eliminate the overall, or “summative,” rating for districts and schools. Chairman Huberty explained the committee substitute would clarify that indicators must be based on disaggregated information and include indicators reflecting access to resources, size and socioeconomics. The substitute would also incorporate policies advocated by ATPE, including a requirement that stakeholders, including teachers, should be involved in the process. ATPE has also advocated for restricting the use of standardized test results and other value-added measures (VAM) for the purposes of evaluating educator performance. The substitute would cap VAM at 25 percent of the educator performance score. The committee unanimously approved HB 22, along with the following bills: