From The Texas Tribune: Dan Patrick asked for a House vote on school choice. He got it. 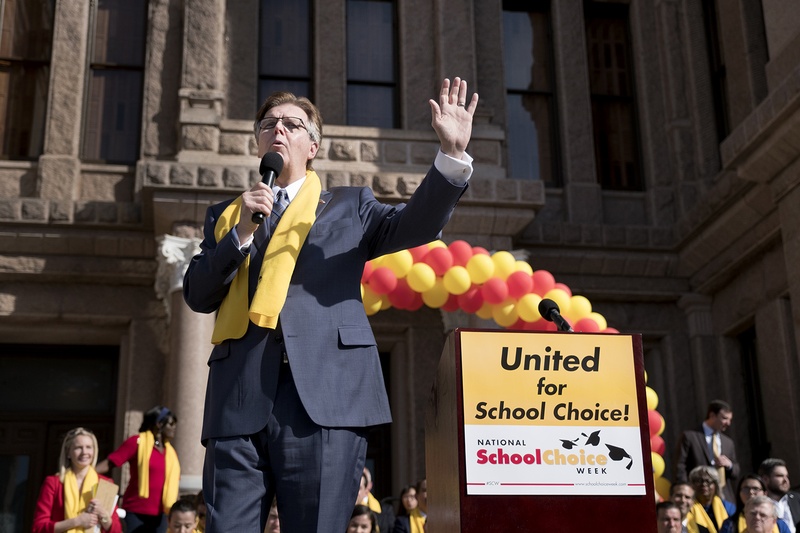 Lt. Gov. Dan Patrick has challenged the House to at least take a vote on the Senate's "private school choice" bill, one of his priorities for the Texas legislative session.

Early on during Thursday’s marathon budget discussion, House representatives showed him that vote would probably emerge as an overwhelming “no.” They voted 103-44 to prevent state money from being spent to subsidize private school tuition, in an amendment to the Senate budget. In offering the amendment, with support from state Rep. Gary VanDeaver, R-New Boston, Rep. Abel Herrero, D-Robstown, said it was “in support of our public schools and our neighborhood schools.” The amendment is not the last word. The House and Senate will need to reconcile their budgets before sending a final version to the governor for approval. And separate legislation that would create a public subsidy for private education has yet to be heard in the House. Patrick’s office did not immediately return requests for comment on Thursday's vote. The House’s vote came a week after the Senate, led by Patrick, voted out Sen. Larry Taylor's Senate Bill 3, which would create two public programs subsidizing private school tuition. In a statement, Taylor said it was unfortunate that House members didn't hear the details of SB 3 before Thursday's vote. "Our bill saved money, gave more students opportunities to get an education better suited for their specific needs, and left more money in public education as a whole and even in individual schools," Taylor said in a statement. "I would hope that we would still have an opportunity to have those discussions." Rep. Hugh Shine, R-Temple, said no changes to the bill would persuade him to vote for it. "If we allow vouchers to start in any form or fashion, they can grow and advance and affect our public education," he said. "What they're calling 'choice,' this voucher situation, is erroneous." The floor substitute the Senate approved was dramatically different than the original, intended in part to appease skeptical rural legislators by carving out rural counties from participating in the programs. Rural constituents consistently oppose using public money to subsidize private education because they do not have access to many private schools. That tactic worked to get the bill through the Senate. But House members demonstrated Thursday that it wouldn’t be as straightforward in the lower chamber. Rep. Briscoe Cain, R-Deer Park, a "private school choice" supporter, tried to change Herrero’s amendment Thursday to allow subsidies for students with household incomes below a given baseline. He took language from SB 3 indicating that a family of three with an income below $75,078 would be able to use the tuition subsidy programs. “A lot of opponents of school choice say, 'This is only for the rich.' This amendment allows poor families to have a choice,” Cain said. His proposal failed 117-27. House Public Education Chairman Dan Huberty, R-Houston, has said a private school choice bill would not make it through his committee, drawing criticism from SB 3 supporters. Asked if it was dead to him as an issue, Huberty said, “I believe so, yes.” He voted for the amendment blocking money to the tuition subsidy programs. “Quote unquote absolutely not,” said Rep. J.D. Sheffield, R-Gatesville, when asked whether the changes to SB 3 carving out his counties from participating would change his vote on the bill. “Just because they sweetened the deal to pull in some people doesn’t mean it’s a good deal.” In late March, lobbying group Texans for Education Opportunity used an online campaign to generate thousands of letters to 29 state representatives lobbying them to back education savings accounts, one of the subsidy programs in SB 3. Though the group claimed the letters were credible, the letters stirred up suspicion after no representative could find a constituent who remembered adding their name to that correspondence. Of the 29 representatives targeted in the campaign, 26 voted Thursday to block money from funding "private school choice" programs. Read related Tribune coverage here:
This article originally appeared in The Texas Tribune at https://www.texastribune.org/2017/04/06/texas-lt-gov-dan-patrick-asked-house-vote-school-choice-he-got-it/. Texas Tribune mission statement The Texas Tribune is a nonprofit, nonpartisan media organization that informs Texans — and engages with them — about public policy, politics, government and statewide issues.
Previous
Next