Catch up on this week's education-related news from Teach the Vote: 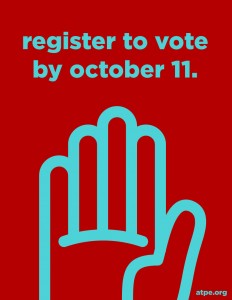 There is only one weekend left for you to update your voter registration or make sure your friends, colleagues, and family members are registered to vote in the November general election. Tuesday, Oct. 11, is the last day to register to vote or make changes to your registration for this election. Check out the 2016 Races page here on Teach the Vote to view profiles of candidates for the Texas Legislature and State Board of Education and find out more about their views on public education issues such as testing and school finance. Don't forget that students who'll be at least 18 years old on Election Day are also eligible to register. Read about ways that teachers can engage students in the election process in this recent blog post.

The State Board for Educator Certification (SBEC) is meeting today, Oct. 7, in Austin. ATPE Lobbyist Kate Kuhlmann is attending the meeting and provided this report on actions the board is considering. A significant portion of SBEC's meetings this year (and even prior) have been dedicated to discussing, reviewing, and revising the board's rules pertaining to educator preparation in Texas. It has been a lengthy process that concluded today with adoption of the new proposals. The rule proposals—which include how teachers are prepared, accountability measures for educator preparation programs (EPPs), expectations of EPP candidates, the types of certificates candidates can seek, and much more—have seen several revisions and delays as the board seeks to continue its implementation of legislation from last session and make additional changes to how EPPs operate in Texas. ATPE has expressed support for portions of the rule proposals that seek to provide more support for alternatively certified teachers and reduce the time programs have to prepare candidates to become fully certified. While these changes are small steps, ATPE appreciates such steps focused on improved training and support for alternatively certified teachers, which studies show are leaving the classroom at a faster rate than their peers. The proposals will now go to the State Board of Education (SBOE), which can affirm the proposals by taking no action or reject the proposals, sending them back to SBEC for further review. The board also adopted changes to SBEC's educator discipline rules. The rule changes will, among other things, establish mandatory sanctions for educators that test positive for, are under the influence of, or are in possession of drugs or alcohol on school grounds. ATPE certainly believes that there are many circumstances in which an educator should be disciplined for such actions and that fairness and consistency are essential goals in decision-making regarding educator behavior. However, ATPE has raised concerns that, while well-meaning, creating a mandatory sanction for such a broad swath of behaviors fails to fairly and consistently consider certain scenarios where such a sanction may not be warranted. For instance, ATPE has suggested that the board specify that it is referencing "illegally-possessed" drugs so that legally-prescribed drugs do not unnecessarily affect an educator's ability to teach. Our suggestions were not included in the rule proposal. SBOE will have final review of the proposal at its next meeting. One of the first actions taken by the board this morning was the election of its new officers, which was needed after several members', including the previous chair's, terms expired and new members were appointed to the board in their place. Board members chose Haskell ISD teacher Jill Druesedow to be its new chair, Slaton ISD teacher Suzanne McCall to serve as vice-chair, and citizen member Laurie Bricker as secretary. This is the first time in recent history that two classroom teachers have served as the top officers of the board. The board also assigned two new members to its legislative committee, which McCall chairs. The two new members are the board's new counselor member, Klein ISD counselor Rohanna Brooks-Sykes, and Rockwall ISD teacher Sandra Bridges. Stay tuned to Teach the Vote for any relevant SBEC updates. The board's final meeting of the year is in early December. 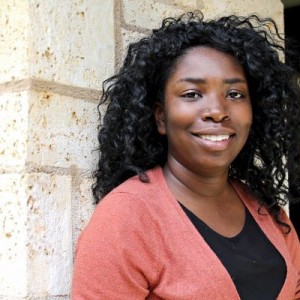 Bria Moore This week, ATPE welcomed Bria Moore to our staff as Governmental Relations Specialist. A native of Longview, Bria holds a degree from the University of Texas in Rhetoric and Writing, where she also minored in Italian. She was most recently employed with a staff recruiting company but also brings highly relevant experience from her prior internships in the Texas House of Representatives and working on early education policy initiatives for a non-profit entity. As GR Specialist, Bria will provide administrative support, collect and track data, and coordinate various projects of the GR department for ATPE. Please help us give a warm welcome to our newest team member, Bria!
Previous
Next