As you prepare to cast your vote in the general election, we've got the latest in education news updates:

Your first chance to vote for pro-public education candidates in the general election begins Monday! Start making plans today to take advantage of the convenience of early voting! Early voting starts Monday, Oct. 24, and runs through Friday, Nov. 4, with Election Day quickly following on Tuesday, Nov. 8. Early voting is a quick and easy way to avoid the hassle of getting to the polls on Election Day, when voters sometimes face last-minute scheduling conflicts that make getting to the polls difficult or lines at the polls once they arrive. Plus, unlike Election Day voting, early voters do not have to vote at their assigned precinct location; they simply cast a ballot at any early voting location in their county. To find early voting locations and hours in your area, check your local newspaper or contact your local voter registrar’s office.

You can read more about voting requirements here, but keep in mind that you must present a valid form of photo identification in order to vote and certain voters qualify for a mail in ballot (for example, those who are 65 years or older or those with disabilities). You can also read about the ways the Texas Educators Vote coalition, of which ATPE is a member, is encouraging educators to vote. Many districts and campuses are offering incentives for registered educators and students who wear their "I Voted!" sticker to school! Before you head to the polls, be sure to check out where your state legislators and your member of the State Board of Education stand on public education issues. Visit our 2016 Races page to search for your districts and read about the candidates in those races. Remember that in November you can vote for any candidate in the general election, regardless of party affiliation. Make your plans to vote during early voting now!

Earlier this week the House Public Education Committee met to discuss vouchers in its final interim hearing before the 85th Legislative Session begins in January. The committee was primarily focused on the two forms of vouchers the Senate is expected to push: Education Savings Accounts (ESAs) and Tax Credit Scholarships. As ATPE Lobbyist Monty Exter reports in his recap here, the House panel ultimately seemed to signal that vouchers of any kind continue to face a difficult road in the committee. However, two members are rolling off the committee, the committee's chairman and a former educator, both of whom have been valued supporters of Texas public schools. Meanwhile, the Senate remains focused on its push for school choice in the form of ESAs. At a press conference on Thursday before a gathering of Dallas area business leaders, Lieutenant Governor Dan Patrick outlined his 85th Legislative Session policy priorities. On education, ESAs topped his list, and he vowed to fight session after session for "school choice" initiatives in Texas. Exter offers a recap of his discussion on ESAs and highlights priorities that would be truly effective here. Also on his agenda of education priorities are bills to curb districts accused of failing to report inappropriate student-teacher relationships, a transgender bathroom bill termed the "Women's Protection Act," and fine-tuning of the cameras in the classroom bill passed last session (in order to ensure all districts comply). 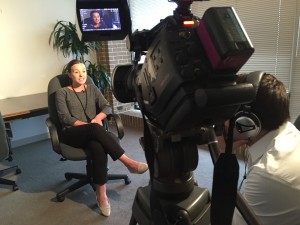 ATPE Lobbyist Kate Kuhlmann speaking with KXAN's Phil Prazan this week. For more on this week's voucher developments, catch a sampling of ATPE in the news. Exter spoke to KVUE after this week's voucher hearing in the House Public Education Committee and to the Dallas Morning News later in the week. Plus, ATPE Lobbyist Kate Kuhlmann visited with KXAN about ESAs following Patrick's press conference and ATPE Executive Director Gary Godsey sat down with KEYE to talk about Patrick's education priorities, where "school choice" and vouchers top the list.

The Texas Education Agency (TEA) is asking for input on the state's plan to implement the Every Student Succeeds Act (ESSA), the new federal education law that replaced No Child Left Behind. Acknowledging that a significant amount of education decision making was returned to states under the new law, TEA wants to hear from parents, taxpayers, and the public as it determines how the law will affect state policies surrounding accountability, funding, and school improvement, among other major issues. “The passage of ESSA has created a unique opportunity to inform Texas’ education policy,” stated Texas Commissioner of Education Mike Morath in a press release issued yesterday. “However, we need input from all parts of our state to ensure that, under ESSA, all students in Texas can receive a high-quality education that prepares them for the future.” TEA developed a survey for collecting input from the public, titled the ESSA Public Input Survey, which will be open through Nov. 18, 2016. The survey is open to anyone interested in providing input on the state's implementation of ESSA, and data from the survey will be considered as the state develops its plan. The state must submit a final plan to the federal government by July 2017.

In related news, the US Department of Education (ED) released two new pieces of non-binding ESSA guidance this week. First, guidelines on how states can invest in early childhood education under the new law, among other things, provides clarification that funding under Title II can be used for professional development for prekindergarten teachers. The second set of guidelines outlines how states can use funding under a new block grant program: the Student Support and Academic Enrichment program. According ED, the new block grant is intended to help states "1) provide all students with access to a well-rounded education, 2) improve school conditions for student learning, and 3) improve the use of technology in order  to improve the academic achievement and digital literacy of all students." Access the early education guidance here and guidance on the block grant program here.   Many teachers across the state are getting used to a new teacher evaluation system: the Texas Teacher Evaluation and Support System (T-TESS). The new system is in its first year of implementation statewide as the state's new recommended evaluation system (districts have the option to create their own evaluation systems, but the vast majority of districts use the state-recommended system). Recently, two ATPE state office staff members observed the training that T-TESS appraisers receive and brought back practical tips to assist Texas educators currently navigating the new system. Head over to the ATPE Blog to see Part 1 and Part 2 of the series called "Navigating the T-TESS," and be sure to check back for helpful tips ahead. Also, as a reminder, don't forget to utilize our T-TESS resource page on ATPE.org, where you’ll find details on the T-TESS design, history of the changes, links to news articles, and additional resources.
Previous
Next