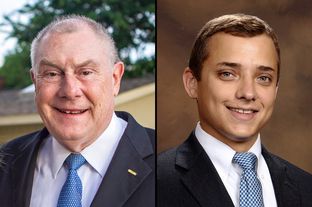 State Rep. Wayne Smith, R-Baytown, faced off with lawyer Briscoe Cain in the May 2016 GOP primary runoff for House District 128. Editor's note: This story has been updated with a statement from Briscoe Cain. In a reversal, state Rep. Wayne Smith is now pursuing a recount in his narrow loss in Tuesday's Republican primary runoff.  Deer Park attorney Briscoe Cain beat Smith, a longtime incumbent from Baytown, by 23 votes in the runoff. As soon as the outcome became clear in House District 128, Smith conceded the race, and his campaign confirmed the next morning that he was not interested in a recount.  But in a statement issued Thursday night, Smith indicated he had changed his mind. "After much thought and careful consideration, I have decided to move forward with a recount," Smith said. "Whenever a race is this close, the option for a recount must be considered. In the past two days, I have been overwhelmed by friends and supporters who have encouraged this option." Cain issued a statement welcoming the recount. "I'm honored with the support my district gave me on May 24th and look forward to the recount," he said. Smith is not alone in pursuing a recount of a Republican primary runoff from Tuesday. He joins Killeen optometrist Austin Ruiz, who lost to Killeen Mayor Scott Cosper by 43 votes in House District 54. The deadline for requesting a recount of a runoff that was held Tuesday is 5 p.m. June 6, according to an advisory issued Wednesday by the secretary of state's office.
This article originally appeared in The Texas Tribune at https://www.texastribune.org/2016/05/26/wayne-smith-now-wants-recount-hd128-runoff/.
Previous